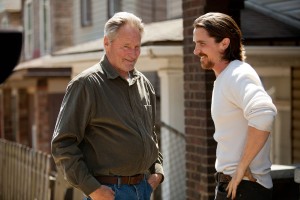 “You let me worry about who’s a nasty sonofabitch.”

Manly words spoken by manly men: that’s one of the dry pleasures of the sturdy burnt-case male melodrama “Out of the Furnace.” The manly men include Christian Bale, Woody Harrelson, Casey Affleck, Forest Whitaker, Willem Dafoe, Sam Shepard—and the late Ted Kennedy, on a bar TV set nominating Barack Obama. Scott Cooper describes his second feature as writer-director, after “Crazy Heart” (2009), as taking influence in equal parts from “The Deer Hunter” and “Jaws.” Oh, and there’s a lot of Walter Hill cooped up in there, as in his 1970s street-boxing tale, “Hard Times.” There’s even a lilt of Hill in Cooper’s affable half-phrases burred by his plain men. “Can you drive?” “This fucker drives itself.” Or “Cheaper t’… get steel from China.” This is a movie that mumbles loudly, lavishing its gaze on marble-mouthed men, men who drop the occasional a, and, the, but never a fuck, fucker, motherfucker.  And as Shepard tosses off as an invitation to deer hunt at dusk: “Wal. Less get us a buck, huh.”

Starting in 2008 and ranging to the present day, “Out of the Furnace” is set in North Braddock, Pennsylvania, an eastern suburb of Pittsburgh with a population of under 5,000 where generations of steelworkers have toiled. People tend to scrap up against one another. Russell Baze (Bale) works in the mills, and his brother Rodney (Affleck), a four-hitch stop-loss soldier who can’t find work outside of returning to Iraq. Russell takes on too much work to cover his brother’s troubles, and they’re both worn to the bone. An accident, put into motion by a man who will later change both their lives, lands Russell in prison. It’s not so much these men are hard cases, but they are knowing hard times. While inside, Russell loses his girlfriend, Lena (Zoe Saldana), to the local cop (Forest Whitaker) the Bazes have known forever, while Rodney takes up bare-knuckle boxing that eventually drives him into the clutches of grand sociopath Harlan DeGroat (Harrelson), a criminal from the hills of New Jersey’s Ramapo Mountains, a five-hour drive away. Shit happens—and how. We’re in the 2010s, but we’re also in the 1970s. Cooper honors the dark streak of that decade’s American movies in many ways, including the cinematography by Masanobu Takayanagi (“The Grey,” “Warrior”), alternately burnished, as if steeped in bourbon, or chilled in blue just shy of hypothermia. Russell is far from hapless, but Cooper’s choice to make him the quarry of fate would suit the generalized “existential” gestures of that era. But Cooper’s view is wider than that, with signs blooming in scene after scene of the world economy outside of their hamlet going to the dogs, and the characters embodying so many forms of cannon fodder: inexplicable war, deadly but work-giving steel mills, illegal boxing, prison.

DeGroat gets the film’s prelude, announcing his art of darkness at a drive-in through a sudden, stupid series of violent acts. Later, the fright comes from Harrelson’s eyes as much as anything: electric blue lightning bolts looking for the place to strike. Even his black leather jacket creaks menacingly, measuredly. “Gimme dat fuckin hot dog” is about as kind a word you’ll hear from him, while post-prison, Russell is given to sipping at cups of tea by morning light as train horns hail in the yard nearby. More typical for DeGroat, a role Harrelson relishes, is “I got a problem wid ev’rybody.”

While Cooper draws distinct, heightened, vivid performances from his actors, he’s also good with bold images, including Russell measuring what a bloodied length of gauze had been used for by wrapping it around his own knuckles. The opening drive-in scene plays otherworldly in the background, a city-bound science-fiction setting, as rural violence pounds in the foreground. A tunnel somewhere between Pennsylvania and the Jersey hills is a dark canopy over the road ahead as single vehicles move toward fate: a rabbit hole of no return. Among the many moments where characters are allowed a breath to take measure, there’s a pastoral shot of a man with a cigarette waiting under a tree, a pair of mismatched dining-room chairs tilted into the grass, and a kid’s bike propped up against a tree, as from mist a rank of figures rise from the forest to do battle.

Cooper’s exceptional taste in collaborators extends beyond actors to understated but detailed production design by Therese DePrez (“Black Swan,” “High Fidelity”); a plangent, guitar-based score by Tindersticks’ Dickon Hinchliffe (who scores most films by Ira Sachs, Claire Denis and James Marsh); and a sound-recording mixing credit shared by Leslie Shatz (“12 Years A Slave,” “Killing Them Softly” “Day Night Day Night,” “I’m Not There”). “Out of the Furnace”’s aural landscape is as detailed as its Rust Belt locations:  crows chorus and insects simmer as empty freight cars sound on unseen sidings. The broad-shouldered landscape is wide open, but it’s closing in in North Braddock: the soundtrack provides constant tension. But it’s the calm, the instants where the film holds a beat, or another. The wait. Those miniscule pauses that Cooper accrues: like a long, long breath. Held. Released.

“Out of the Furnace” opens Friday, December 6.