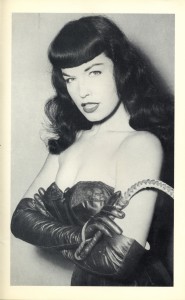 Mark Mori’s “Bettie Page Reveals All” is the kind of documentary that’s foolproof: find a bigger-than-life subject who just happens also to have a straightforward yet indefinable girl-next-door quality. Put as much of the imagery of the late pinup queen with the jet-black hair and bold bangs together along with audio recordings of her rich, Southern drawl, from interviews conducted in ten years before her death in 2008 and stand back. (Also: use as little footage of octogenarian Hugh Hefner in his sateen bathrobe as possible.) Let the woman be herself. Let Bettie be… Bettie Page. Even the simplest details of her stories sing in her memorable intonations: “They got me to drinkin’ blackberry brandy—it’s very tasty, you know.” Mori, who was an intimate of Page’s for more than a decade, doesn’t skimp on the details of her conversion to evangelical Christianity and her later history of depression and mental illness. But what the curious will come for is timeless, what Hefner described as Page’s uncommon “combination of naughty and nice” in her cheesecake and nude modeling in stills and in film loops. “When you look at the pictures, there was so much joy, so much freedom,” Mori has written. “Bettie can be in the freakiest weird bondage photo, but portrays the attitude that it was all so much fun.” A raft of never-seen images and ample film footage fill out the bill. The other interviewees lean on sturdy platitudes, include burlesque performer Dita Von Teese, Rebecca Romijn and a range of extremely creepy-looking middle-aged men with garish facial hair. 101m. (Ray Pride)