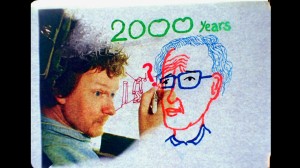 “I think a very specific motive of my philosophy is to avoid any sort of concentration of power or control and any sort of fame,” Michel Gondry told me five years ago when he was promoting “Be Kind Rewind,” he said of his fears and hopes of what the movie industry had become. “With YouTube, it’s still going to be, you have one person.  You have the chance for everybody to be heard, but still it’s one person is going to be heard more than another, and pile up all the attention. It’s the same way that you can say the journey is the destination, the making, the process of expressing yourself is as important as watching the work. Of course, it’s probably more important than watching it, buying it, whatever you do with it.” Gondry, whose films since have included “The Green Hornet,” but more importantly, several smaller films like “The Thorn in My Heart,” “The We And The I,” and now, “Is The Man Who Is Tall Happy?” seems to have adopted that contrarian, low-to-the-ground approach to a major chunk of his new work. “Anything you do that can lead to a market, it’s going to be taken by people who are completely interested in profit.” But could anyone say that about a documentary on the ideas of linguist-professor-activist Noam Chomsky, consisting mostly of conversations accompanied by his own hand-drawn animations? (Improbable.) But the meeting of their minds has a genial harmony: Gondry’s deeply accented English leads to conversational confusions that reveal more about the two very intelligent men than any stack of clipboards clipped with rote questions. There’s an air of lucid dreaming about the whole enterprise, similar to, but with a different cumulative impact than Richard Linklater’s “Waking Life.” Like doodling itself, “Is The Man Who Is Tall Happy?” is filled with small, peculiar, unpredictable satisfactions, including the sense that Gondry is perfectly, elegantly in his element. 88m. (Ray Pride)

“Is The Man Who Is Tall Happy?” opens for two weeks Friday, December 6 at Siskel. The trailer is below.