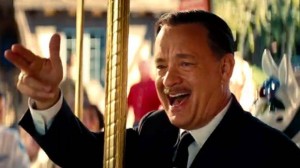 Or, “How Walt Disney Nanny-splained The Life Of The Writer Of ‘Mary Poppins’ To Herself.” Genial, inconsequential, deeply odd but not quite “quirky”—a bifurcated narrative about the alcoholic father of novelist P.L. Travers (Colin Farrell) and the work methods of Walt Disney (Tom Hanks)—“Saving Mr. Banks” is a movie made by the Walt Disney Company about Walt Disney himself that has a litter of knowing japes and intermittent bites of sarcasm, largely from Emma Thompson’s bitter, anxious, uneasy, red-toe-polished control freak. The control extends to the current corporation, at one point in the form of the CGI plume of a single, nonexistent lit cigarette is all that is allowed to indicate the Man’s historically well-known chain-smoking jones. The original screenplay by Kelly Marcel (who has since adapted “Fifty Shades of Grey”) mixes grown-up asides with the lightweight general drift of the telling of Disney’s twenty-year pursuit of the rights to make a musical of the exertions of the flying nanny. With an overweening Jason Schwartzman as the singing half of the songwriting Sherman brothers and Bradley Whitford as an eye-rolling screenwriter, Paul Giamatti as Travers’ wise, sweet-tempered driver, Ruth Wilson, Rachel Griffiths and Kathy Baker. John Lee Hancock (“The Alamo,” “The Blind Side”) directed with high professionalism. 125m. (Ray Pride)