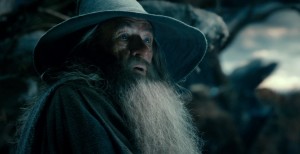 “Smowwwwg.” “Smowwwwg.” Okay. “Smowwwwg” it is. The once-diverse career of fifty-two-year-old New Zealand filmmaker-turned-fantasy impresario Sir Peter Jackson is now given over to the seeming never-to-end, near-shapeless multiple entries in his ongoing Tolkien sagas. I haven’t added up the running time of the entire long march, but as with the first of three “Hobbit” films drawn from the 320-or-so pages of the novel about a small forest creature who only wants to find his way home, the mind finds ample space to wander. Never a fantasy fan, I’m most intoxicated by the scale of Sir Peter’s fiscal accomplishment. (As well by the fact that his Hitchcock-like cameo in “Smowwwwg” takes up about four seconds of the film’s first ten seconds.) All glory to New Zealand! Without even taking a quick swoon at the figures behind the “Lord of the Rings” movies, the first “Hobbit” outing, “An Unexpected Journey” grossed a reported $1,017,000,000 worldwide, a figure that usually returns half the amount to the studio, and which does not count the endless offshoots on video. In October, Variety reported that the three films, with one still in post-production, have cost at least $561 million, which means there’s a fine chance everyone will be in profit (except New Zealand taxpayers) after the theatrical run of “The Desolation of Smowwwwg.” It’s awe-inspiring industry, coming from the barefoot boy from Pukerua Bay, as if he had built the railway, crafted the trains, refined the fuel and produced the goods that would ride the rails. How many men in all history have commanded such industry, mastered so many forms of logistics? And all built on a feisty, slobbery serial with momentary satisfactions amid imperturbable bunkum, and dialogue like “Kill the dwarf filth!” and other bristling bejabbers intoned doomily. (Plus, spiders. Huge, big, nightmare spiders if such things keep you awake. Spiders.) It’s humbug, but man, the grandiloquence it takes to breathe pixels into it all. Although Martin Freeman’s Bilbo Baggins resembles a slightly taller Dudley Moore the more exertions are visited upon his fluffy hair, the final hour takes on a semblance of shape. After intrigues built upon Rube Goldberg-like physical conniptions in a fishing village glimpsed largely at milky, J.M.W. Turner-like dawn, the dragon set-pieces with Smowwwg (the distorted voice of Benedict Cumberbatch) assume shape and geometry and shape-shifting beauty, including the shimmering of shifting sands of gold that has been coined and shaped to many designs. But after those sinuous satisfactions, especially of the magnificent realization of the dragon, “Smowwwwg” reverts to sheer donnybrook, where nothing succeeds like excess, and the dragon is battled by dwarf and elf and Hobbit in a semi-decipherable battle of molten metal and industrial de-evolution. Molten gold seethes down like the sweetest contents of Caramelo candy bars passed down from the Gods. Oh, the beauty of the fallen, fiscal world. 161m. (Ray Pride)

“The Hobbit: The Desolation Of Smaug” opens Friday, December 13 in a variety of eye-watering 3D formats. Twice as many screens as for the first “Hobbit” will offer the “high frame rate” format Sir Peter prefers, although “Smowwwwg” was shown to Chicago critics only in “Real 3-D.”