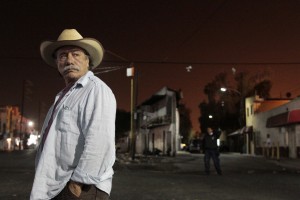 Another simmering border tale from “Lone Star” director John Sayles, the veteran independent, often-self-financing writer-director-editor’s eighteenth feature, “Go For Sisters” holds unusual pleasures. The earliest scenes establish California parole officer Bernice (LisaGay Hamilton) as brusque and purposeful, at least until a case is dropped in her lap involving a recovering addict, Fontayne (Yolonda Ross), to whom she was once close and friends thought could “go for sisters.” Bernice, unexpectedly, needs her once-friend’s help when her son, Rodney, disappears along the Mexican border.  Boundaries cross: Bernice seeks the help of fallen ex-LAPD detective Freddy Suarez (Edward James Olmos) to do anything he can to find Rodney. Soon, they’re negotiating the currents of the underworld of Tijuana, where they’re faced with a ruthless gang of human traffickers dealing in Chinese lives. It sounds like elemental B-movie material, but Sayles is, as always, after a different game. Although his origins are in the fine craft of structuring Hollywood screenplays, Sayles’ own films use dots and dashes of genre conventions for a more novelistic exploration of the shading of personality and the elements of motivation. (His precision with vernacular speech is seldom equaled over the course of an entire feature.) Even with a brutal subject, Sayles finds satisfactions in conversations that tell us more about his characters than the potentially intricate plot, and that also demonstrate the intimate interconnectedness of the world of late capitalism. Some key scenes are in Spanish, including a small gem that has an unexpected cameo. Even the smallest of the many roles in the cast has some telling detail, and Olmos makes the most of a grumpy bear rousted from his hiding place. With Jacob Vargas, Isaiah Washington, Hector Elizondo, Tessa Ferrer, Hilary Barraford, Elizabeth Sung, Martha Higareda, Alejandro Cardenas, Richard Coca, Omar Leyva, Dominic Colón, Javier Calderon, Jessica Pimentel, César Alejandro, McKinley Belcher III. 122m. (Ray Pride)