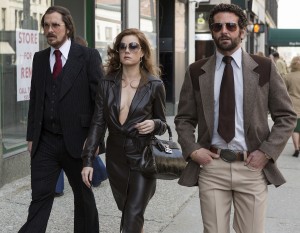 “Some of this actually happened.” The opening title card of David O. Russell’s seventh completed feature, “American Hustle” sets the scene serenely, followed almost immediately by a scene of comic inspiration, laying the secrets of the construction of the most intricate of 1970s male comb-overs bare. (We could well be watching a reflection in Donald Trump’s mirror.)  Since “The Fighter” (2010), his first feature since 2004’s “I Heart Huckabees,” Russell has come into his own as a maker of heartfelt, headlong comedies with a screwball lilt and a topsy-turvy velocity that hark back to the classic comedy era of the 1930s. Where did this passion come from, this technique, this output? I’m no fan of “The Fighter,” although a couple of colleagues make wonderful defenses of it, and there are intermittent flashes (including the wondrous romantic comedy culmination ending) of unexpected swoonworthiness in “The Silver Linings Playbook.” All of the conflict reported from his earlier shoots, combined with the improvisational tussle and wrassle his actors thrive upon in his 2010s films, come to full fruition in “American Hustle,” and it’s heady, raunchy, dynamic, sparkling joy. (Its surreal level of energy, akin to that of “Goodfellas,” makes for one of the few valid reasons to compare Russell’s romp to any work by Scorsese.) Revising “American Bullshit,” a highly-regarded unproduced 2010 script by Eric Warren Singer, and editing up until only a couple of weeks ago, Russell has confected an inspired, almost indescribably alive comedy-drama of a mostly forgotten patch of the history of American political corruption, the FBI’s “Abscam” sting. There are whiffs of Preston Sturges in the strong, willful female characters and rumbustious physical and interpersonal comedy, as well as the element of the virtuoso scammers scamming other scammers hailing toward both Sturges’ “The Lady Eve” and the definitive comedy clockwork of Ernst Lubitsch and Samson Raphaelson’s “Trouble in Paradise.” (“Who’s the master? The painter or the forger?” a character asks.) And it’s such a season for adults comporting themselves as adults, for worse and for better: “American Hustle” holds its own against such eminently R-rated fare as “August: Osage County,” “The Wolf Of Wall Street” and “Her.” The likes of “She was the Picasso of passive-aggressive” is followed soon after by “We fight and we fuck, that’s what we do, it’s our thing.” Trouble and desire, oh my. As the lead scammer, Christian Bale portrays crazy confidence with swimming ease. Bradley Cooper’s FBI agent is all agitation and defensiveness. As Bale’s partner in crime and lover, Amy Adams is spectacular, febrile, dramatic, comic, sharp, sarcastic and magnificent to look upon, especially her soaring laughter in an explosive comic-sexual scene set in a nightclub ladies’ room stall. But Jennifer Lawrence, ten years, maybe, too young to be her character, Bale’s wife, temptress to many, a stay-at-home mother given to weird fiery explosions—literally—no matter, no worry. We know where Lawrence came from—Kentucky—but this performance is a purple mountain of majesty. (Plus, singing “Live and Let Die.”) I do not know what this movie is saying, and I do not think “American Hustle” knows what it is saying, in full measure, but it says a lot of things, and I like its style. It’s a fuckin’ stunner. With Jeremy Renner, Louis C.K., Michael Peña, Alessandro Nivola, Jack Huston. 129m. (Ray Pride)