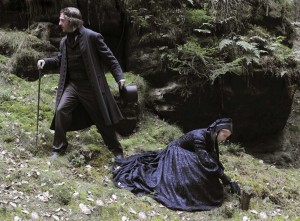 Filmmaker Aleksandr Sokurov’s 2000 single-take Steadicam epic “Russian Ark” was recently restored and re-released, but it’s taken his 2011 adaptation of Goethe’s “Faust” an unusually long time to make it to American screens. And however estimable it is—and it is captivating in its conviction, hallucinatory zeal and surreal invention—you can immediately see why: it’s as grimy green-gray and glaucous as any of his three earlier “Men Of Power” films—“Moloch,” “Taurus” and “The Sun”— and he continues to fiddle with all manner of reframings and optical obfuscation. (If Sokurov’s not half-blind, he’s preparing himself for the day when he is.)  As shot by Bruno Delbonnel (“Amelie,” “Inside Llewyn Davis”), there’s a painterly rush and crush of vital imagery even as the vast weight of prior intellectual cogitation of the meaning of the tale weighs down on it. A wing of a museum could likely be devoted to the paintings, especially Dutch, whose influence “Faust” gorges upon. Let there be milky light! With Johannes Zeiler, Anton Adasinsky, Isolda Dychauk, Georg Friedrich, Hanna Schygulla, Sigurdur Skúlason. 134m. (Ray Pride)