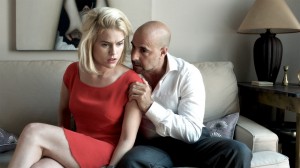 “Some Velvet Morning,” Neil LaBute’s miniaturist provocation, is an all-talking real-time two-hander with the never-flagging Stanley Tucci as Fred, a so-presumptuous, nerve-jangled fifty-year-old man who claims he’s left his wife with only a couple of bags and lands on the stoop of his younger mistress (Alice Eve) from four years earlier. Yes, she’s called “Velvet.” Eve’s splendid “What. Ever” spins both Fred and the movie into the next level of spite. (“That’s the way these things go. Did you ever read ‘Lolita’? It ends badly.”) Both actors charm with assurance and lightly electric undercurrents amid the outbursts. (“I am NOT a fucking toddler!”) With warm, lightly queasy handheld cinematography by Rogier Stoffers (who shoots for LaBute, Philip Kaufman and Richard Linklater), “Some Velvet Morning” is not only filmed theater, but also a showcase of superior performance, and shot in a reported eight days. “You’re being a little bit charged up about things, it’s a bit unnerving,” Velvet says, rightly, as Fred tries to stammer and jape his way through his needy entrance:  “We can’t all be lawyers. There’d be nobody left to hate!” One revelation leads to another, as well as the expected sexual confrontation, but then, dare I say, there’s a moment of gentility, of grown-up understanding, and even, well, tenderness of a weird order. Desire, love? It’s all transactional. The film doesn’t full investigate the lovely title, but a hundred stories could grow from Lee Hazlewood’s psychedelic 1960s lyric for Nancy Sinatra, even absent his yoww of drawling delivery: “Some velvet morning when I’m straight/ Flowers growing on the hill/ I’m gonna open up your gate/ …  Learn from us very much/ And how she gave me life/ Look at us but do not touch.” The final close-up forgives near everything in the film, and the complexity of Eve’s reaction is on a par with Jennifer Lawrence’s at the close of “The Hunger Games: Catching Fire.” 82m. (Ray Pride)

“Some Velvet Morning” opens Friday, December 20 at Facets. The trailer is below.