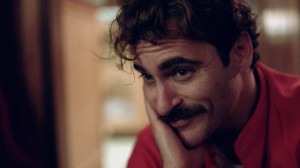 It’s nearly the future, but it’s just now for Theodore Twombly, a successful professional writer of assuredly sentimental personal letters. The world is more automated than anything imagined by the cold wizards behind Google Glass: in an elevator leaving work, Theodore murmurs to the tiny device in his ear, “Play melancholy song,” and after a few bars, refines, “Play different melancholy song.” In a softly lit, given-to-orange-red Los Angeles, shot partially in Shanghai, Theodore (Joaquin Phoenix) procrastinates on finalizing his divorce while thinking of what went wrong with his wife (Rooney Mara), while having a warm, Platonic, female-male friendship with his neighbor, Amy (Amy Adams), a married documentary-maker and programmer. His sentiments shift when he buys an operating system for his computer, an intuitive entity that listens to you, that understands you, which dubs itself Samantha and has a chipper, flirtatious, intimate, slightly husky voice: Scarlett Johansson. A.I.-yi-yi: she’s got the emotional intelligence of a lover and a mother. The conceit sounds awful from outside, but inside “Her,” it’s supertragicmagicdelicious: writer-director Spike Jonze really, really makes it work. (Call it “Siri and Theodore’s Excellent Adventure.”) By exquisite extension, Jonze builds on the feigned intimacy of software and social media sentiment that presently exists, a kind of lucid dreaming of the near future, but also of the dangers of not knowing the difference between fantasy and what is right at hand. (And is not the truest of true romances the one that can, could never, ever be consummated?) Every single stroke of the movie is designed, including technology that harks back to luxe past design rather than Jony Ive’s form-is-form philosophy. In sleeker fashion, there are echoes of Andrew Niccol’s fine accomplishment in production and costume design in “Gattaca”: tomorrow will always boast hand-picked details of the today now passing. I could sink into this film a few more times before even knowing how to describe its simplicity and conviction: the only other filmmaker wbo knows how to make sound, music and moment fit like a fitting of a perfectly suited slipper would be Sofia Coppola. Patience. Trust. And the exploration of an awful lot of sublimated feelings, which run from everyday sadness and aloneness to cultivated rage. (The range of swearing and sexual awareness in “Her” is wide and solid.) And especially coming in the same week, after her rich, febrile, mind-fuck of a performance in “American Hustle,” Amy Adams is fiercely compelling in understatement as a wholesome thirtysomething-girl-next-door-type documentary filmmaker. There’s a moment when she exits an elevator with her husband, and Theodore makes a joke about not being able to tell games from porn, and Amy says, with pluperfect delivery, “I would laugh if that were true.” But there’s more, gently, emphatically, decidedly more: Amy is now full-length in the frame, the door poised to close, her strawberry-to-blonde curls, pinned-up, dangle at her shoulders, messenger bag draped to her back, button-down shirt under a V-neck sweater, black pants cropped well above her ankle, above clog-gish shoes, this Amy is a timeless snapshot of a woman at that time of career in that career at that time of her life, but Adams does a couple of things as she delivers the line, rising on one ankle, falling with the other as she twirls, and away from Theodore and toward home and husband, but jaunty, “jaunty” in the gestural equivalent of two-point type. (It is not even her small gentle smile of deep delight.) How could he not love her? How could she not be further ache for him? Surprises await. Every minute of “Her” is a delicate, delicious dance like this, even when a cute snowman in a hologram video game won’t stop saying “Fuck you, shithead-fuckface.” And Joaquin Phoenix? Please. Must you ask? Technically, everything is but a dream, including cinematography by Hoyte Van Hoytema (“Let The Right One In,” “Interstellar,” “Tinker Tailor Soldier Spy”), production design by K.K. Barrett (“Being John Malkovich,” “I Heart Huckabees,” “Marie Antoinette”), costume design by Casey Storm (most of Jonze’s work) and music (different melancholy) by Arcade Fire and Owen Pallett. The key producer, is, well, duh, Megan Ellison. With Chris Pratt, Olivia Wilde, Melanie Seacat, Brian Cox, Adam Spiegel and a range of almost-familiar voices as ghosts in the machine. 120m. (Ray Pride)