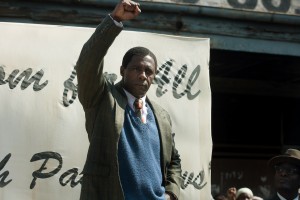 Nelson Mandela had been in fragile health for years, so his recent death was no surprise, yet the timing of his passing—announced during the London premiere of “Mandela: Long Walk to Freedom”—would seem to make the circumstances around the release of the PG-13 biopic potentially uncomfortable. Those concerns disappear once you see the film: it’s not good. But while the work of British director-actor Justin Chadwick (“The First Grader,” “The Other Boleyn Girl”) isn’t the inspired (or even incendiary) portrait one might hope from a rich life full of upheavals and reversals, the performances by Idris Elba as Mandela and Naomie Harris as Winnie are worthwhile. The presence and thunder Elba brought to canceling the apocalypse in “Pacific Rim” here soars far above the checklist approach to a long life’s drama in the perfunctory screenplay, based on Mandela’s memoir, by William Nicholson. Great performance, indifferent movie. The images by cinematographer Lol Crawley (“Ballast,” “Here”) have a beauty wholly apart from the story being told. The whole enterprise is marked by a terrible song by U2, “Ordinary Love,” sung by Bono. With Tony Kgoroge, Riaad Moosa, Zolani Mkiva, Jamie Bartlett, Lindiwe Matshikiza, Deon Lotz, Terry Pheto. 141m. (Ray Pride)