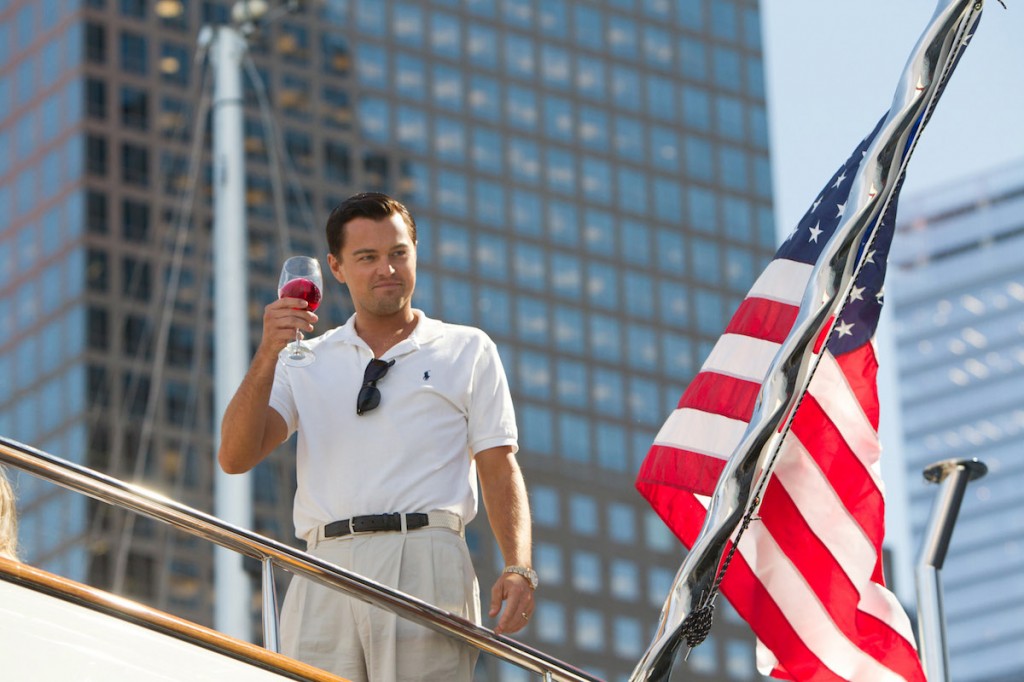 Since the sixth word of the movie is “cocksucker,” and soon enough someone’s straw-snorting coke in proximity to a hooker’s upturned anus, so “The Wolf Of Wall Street” is not shy about extending its paw for a frantic shake straightaway.  The rise and rise and fall and fall of a convicted late-1980s stock-trading fraudster, of course, makes for incendiary, insidious sensationalism. The rush of narration rolls on: “I use Xanax to stay focused, Ambien to sleep, pot to mellow out, cocaine to wake up and morphine… because it’s awesome.” All manner of powder and power: white and green are the warmest colors. The litany about the virtue of drugs in the accumulation of money and power seethes, “See? Enough of this shit will make you invincible. Money is the oxygen of capitalism and I wanna breathe more than any other human being alive.” It is a sustained shock that a seventy-one-year-old filmmaker, even Martin-fucking-Scorsese (and dedicated editor Thelma Schoonmaker), can heighten the hyper character of a “Casino” or “Goodfellas” on a wholly other topic and surpass himself in vitality and insurgent hallucinogenic energy, and at a 179-minute duration that does not flag, laden with what feels like huge passages of inspired improvisation. Terence Winter’s adaptation of convicted fraudster Jordan Belfort’s memoir is nonstop splat-thwack-four-letter-120-miles-an-hour-fuck-shit-fuck you. To money, to America, to women: the highest compliment a burnished blonde could receive? “I would let her give me AIDS.” There’s enough plot to capsize a ship—and there is a ship that might well capsize in there somewhere—but it’s the swarming caricatures that motor the movie. Take, for instance, Jonah Hill, donning prosthetic teeth, as Belfort’s second, a drug-fueled, ‘lude-lusting Jewish jackrabbit. As the fictionalized “Donnie Azoff,” Hill sheds all vanity—the vanity of glorious uglification—to present an unyielding freak of human nature.  The banned Lemmon 714, king of all Quaaludes, prompts a sustained slapstick setpiece of comic fury between Leonardo DiCaprio and Hill. It’s a manic bacchanal of close observation: you’d think Scorsese had at least passing acquaintance with the narcotics of that era. (The sizzling, sometimes phosphorescent photography is by Rodrigo Prieto, whose work on Spike Lee’s post-9/11 “25th Day” is a grimier portrait among Manhattans passed.) Men do bad who think they’re good, or have the means to be thought good: “Money doesn’t just buy you a better life—better food, better cars, better pussy—it also makes you a better person. You can give generously to the church of your choice or the political party. You can save the fuckin’ spotted owl with money,” DiCaprio’s leonine dissolute keens in voiceover. It’s nearly injectable cinema: not only would “Goodfellas” and “Casino” make fine alternate titles, as would “Rush.” [A non-specific description of part of the ending follows.] A couple seconds after the credits begin, the last shot kicks into the mind and a chill falls on the hot-heat-hot we’ve just soaked in. A single shot illuminates what Scorsese & Co. had in mind: whether eager brokerage clients or expectant seminar payees, the still-selling Belfort knows there’s an audience for his stuff. And willful “Wolf of Wall Street” leaves us as one more mark: this image is only a few seconds long, but it provides a savage silence, a pall is cast, and oh-so-quickly, in a fine coup de theatre, a moral moment has passed. With Jean Dujardin, Kyle Chandler, Jon Bernthal, Rob Reiner, Margot Robbie, Cristin Milioti, Christine Ebersole, Joanna Lumley, Jon Favreau, Ethan Suplee, Shea Whigham, Fran Lebowitz, Spike Jonze, the Temple University Diamond Marching Band, and just the right tincture of Matthew McConaughey. 179m. (Ray Pride)