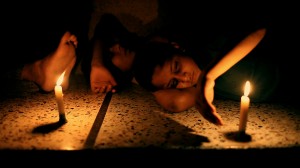 Omar Mullick and Bassam Tariq’s fantastic beauty of a documentary “These Birds Walk,” is lyrical wonder of intense and sustained observation, but it’s also fierce and compact in its look at a handful of orphans in Pakistan.

The pair’s first feature follows a Karachi runaway named Omar, no more than ten years old, filled with hostility, resentment, declamations and, most of all, a longing for “home.” (Mullick is credited as co-director-cinematographer and Tariq as co-director-co-producer.) Omar ran away from his rural village, and is now raring to run away from the city. Omar is befriended by Asad, a young ambulance driver who works near the orphanage, one of several maintained by an elderly, influential Pakistani philanthropist, Abdul Sattar Edhi. (At first the film seems like it will be about Edhi, but he’s the past: Omar is the present and the uncertain future.) An opening scene sets up a metaphorical notion, as Edhi supervises the washing of a roomful of foundlings: can we wash children clean before we let go of them, and send them out into the world alone? Edhi is in so few scenes, but in a sense, he’s everywhere. Who will watch over this generation of lost children?

Two questions resound through Omar’s days, through ups and downs: “Where is home?” And “What is home?” Omar earns the film’s attention with his energy, a resilient, ebullient protagonist among the other lost boys, but the great gift of “These Birds Walk” is Mullick and Tariq’s emphatically cinematic style, a compelling, lyrical feat of composition, sensation, tempo and duration of painstaking (and sometimes painful) intimacy. (There’s also a chase scene where Omar darts away into a crowd that elevates an already greatly accomplished documentary into a superb action film.)

“These Birds Walk” rests neatly alongside other recent nonfiction films that have the confidence to let story breathe. There are so many traditional, less interesting, less valuable forms their months of shooting could have taken. The way it feels in so many scenes, there’s almost no way a filmmaker could have planned it.

I spoke to the pair at the 2013 True/False Film Fest during a late afternoon snowstorm and hoped to draw out what influences they brought to their beautiful, heartening film, and stumbled over the example of Abbas Kiarostami, the Iranian director who’s so good with children and non-actors, as well as someone who blurs the lines of nonfiction and fiction. “I’ll be explicit about the likenesses we draw,” Mullick is quick to answer. “I think that we’re New York filmmakers. And I think nbso online casino reviews a film that we really loved, that we thought set a benchmark, was ‘Streetwise,’ by Martin Bell about homeless kids in Seattle. I know aesthetically a film that I love is ‘My Own Private Idaho,’ which I see as almost a fictionalized sequel to ‘Streetwise.’ If there is a foreign film that I like, then there’s a film about Chechnya called ‘Three Rooms of Melancholia.’ To me, her work, Pirjo [Honkasalo]’s work is the bar, you know?”

The filmmakers draw a line between beauty and story. “I think it’s all about making sure [the imagery] works with the story,” Mullick says. “I think everything that we have is like a well-oiled machine. Omar’s an incredible shooter, and I think everything was shot very well, and he can probably speak to that, but when we came to the editing, I think for us, it was more important to make sure that we had that lyrical element, but that we’re also getting in with the characters. In the work-in-progress [which was shown at True/False 2012], there was one scene that unfortunately we didn’t keep because it was just too much of the same thing. We wanted to make sure that everything is also saying something that’s important and it’s also building a larger story. And even if it’s not necessarily moving the narrative forward, we’re at least learning something different about the characters, opening a larger world that people can understand.”

There’s an extended sequence that’s beautiful and elusive, where Omar is running and jumping past other boys, he’s an acrobatic silhouette.  “What does that mean?” you wonder, watching. It builds a sensation despite any literal meaning being elusive, a swatch of texture about childhood energy, a child’s indomitability even behind bars. After shooting that sequence, Mullick tells me he thought, “This is the success of it, if we’ve pulled it off. You said, ‘elusive and behind bars,’ which I mean, for me, that frame only after we’d shot it, I thought, ‘God, that actually speaks to these bird-caged lives, and therefore, the title.’ And I don’t think I realized it at the time, but that may be even why it stayed and made the cut.”