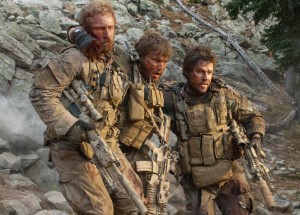 Telegraphic, punishing and brutally well-crafted, writer-director Peter Berg’s “Lone Survivor” is in a school with Ridley Scott’s “Black Hawk Down” in its heated depiction of the deadly confusion of battle. A serious-minded portrayal of a covert 2005 Navy SEALs mission to take out an alleged Al Qaeda figure in the mountains of Afghanistan, “Lone Survivor” thrills, horrifies and also punches home the simple point that individual acts of conscience can save lives, and even change the world. The boldly colored, hyperreal cinematography is by Berg’s regular cameraman, Tobias Schliessler, akin to his inventive palette for the little-seen “The Fifth Estate.” Gregory Nicotero and Howard Berger are given a rare opening credit for special effects technicians: an early omen that things will not go well for everyone on patrol. (Well, then there’s that title.) Credit for the effective, often unusually minor key score is shared by Texas band Explosions in the Sky, who also scored Berg’s “Friday Night Lights” (film and series) as well as David Gordon Green’s “Prince Avalanche” and the song “The Moon is Down” in Green’s “All The Real Girls.” (The other composer is Steve Jablonsky who scored “Transformers” and “Ender’s Game.”) Both dispiriting and uplifting is the roster of producer credits on what once might have been financed by a studio alone: twenty names are listed as either producer or executive producer. It’s dispiriting because that’s what it takes to get many movies made today; it’s uplifting because the film has been made, and Berg’s superior craft is not diminished by the circumstances of its production. With Mark Wahlberg, Emile Hirsch, Ben Foster, Taylor Kitsch, Eric Bana, Ali Suliman. 121m. (Ray Pride)