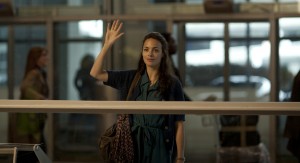 (Le passé) Coming after “A Separation,” Asghar Farhadi again charts the circles that all our lives are comprised of, and the encircling that fate can tighten against us. In the urgent, gripping French-language “The Past,” the moving parts of the Iranian director’s plotting of a Paris-set family drama filled with broken relationships, many of them the stuff of melodrama, yield the most unexpected and moving results: all of these characters, each of these events, each of these spaces fluently reveal terror and beauty. After a four-year separation, Ahmad (Ali Mosaffa) returns to Paris from Tehran to finalize a divorce from his French wife (Bérénice Bejo, “The Artist”), who wants to marry her new boyfriend, Samir (Tahar Rahim, “A Prophet”).  Complications amass, including a secret about Marie’s teenage daughter (Pauline Burlet).  (Farhadi fixes on Bejo’s paradoxical expressions; he’s said he admires her capacity to demonstrate “doubt.”) While Farhadi avoids a tourist’s-eye-view of Paris, he remains a master of depicting interior space, of creating lyrical geometry. (Cinematographer Mahmoud Kalari also shot “A Separation.”) There are details we never learn about the character’s lives, yet we sense them through their actions and reactions. Farhadi’s most thrilling gift, as seen in “A Separation” and “About Elly,” which seems innate and intuitive, in demonstrating how figures move, are framed by frames, reflected by surfaces, going beyond elementary considerations like the blocking of stagecraft or cinema’s camera motion and placement, describing a vital mathematics of humans in motion, in social interactions, especially the most intimate and fraught. He’s a sculptor of emotion and space, refracting both. Life’s only a matter of perspective, but the perspective is ever-shifting. Every element is relentlessly, restlessly suggestive: so many windows, so many frames filling the film’s décor: voices raised but muted behind windows in an airport; the view through wrought-iron fences; the gridding of safety mesh on an overpass; low, unexpected sets of stairs; hands in the pass between a dining room and a kitchen; smoking at a French door open to a balcony by night; faces peering through just-opened doors; a hoarding on a wet street shimmering a blank red; the clatter of overlapping empty picture frames lined up in front of a window in a frame-builder’s workshop. Bejo was named best actress at Cannes 2013; “The Past” was Iran’s official selection for the Academy Award for Best Foreign Language Film, but didn’t make the shortlist. 130m. (Ray Pride)

“The Past” opens Friday, January 10 at Landmark Century, Renaissance and CineArts Evanston.