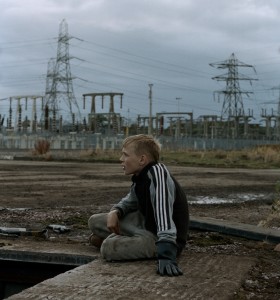 The first great fiction film to be released in Chicago in 2014, Clio Barnard’s second feature, “The Selfish Giant,” is breathtakingly assured, ruggedly beautiful, moving and justifiably tragic. Working in a similar vein as Ken Loach—vital children, vast profanity, subtitled dialogue, the suffering underclass, the resolute spirit—Barnard manages to craft something gorgeous, aching, shattering: it’s a blissful bruise, a poem that punch-punch-punches. Two poor West Yorkshire boys living on a Bradford council estate discover they can make money as scrappers, working for Kitten (Sean Gilder), a scrap dealer who lends them a horse and cart. Thirteen-year-old Arbor (Conner Chapman) and his older friend Swifty (Shaun Thomas) are outsiders among outsiders. (Their natural, unaffected performances quicken the heart.) Arbor’s a jug-eared blond punk with a pelt of a haircut on his head, quick to smile but quicker to offense. Arbor’s also greed waiting to happen, and when it does, things grow darker still. The sky is gray and low by day and night seems limitless. Once-industrial lands have grown over, industry has gone and grass and greenery grow wild. The landscape is dotted with railway tracks, electrical transmission towers, triads of disused power station cooling towers stand like ancient altars no longer used for sacrifice, swaddled in eggshell-to-gray fogs; sheep graze, simply. The small shaggy horse with its cart is tinier still in landscape, another way of scaling the world against these lost boys. Barnard describes her film as a realist fable, and cites Loach’s unequaled “Kes” (1969), as well as filmmakers like the Dardennes and Samira Makhmalbaf. “The Selfish Giant,” timeless but set in this moment, in a specific place in the world, is bleak but hardly dire. Barnard’s meticulous observation elevates her film above the myriad prisons her characters are held within. 91m. (Ray Pride)

“The Selfish Giant” opens Friday, January 10 at the Music Box. The UK trailer is below.