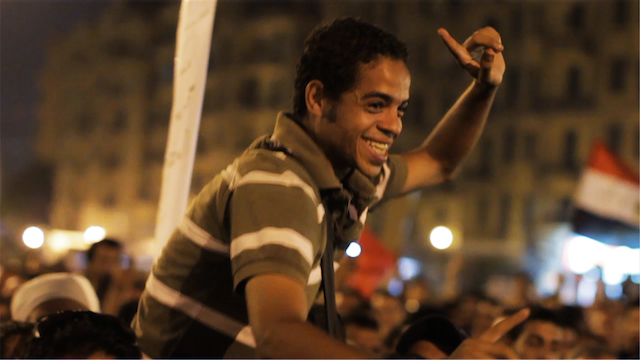 “The Square” (Al Midan) is one of 2013’s two or three finest documentaries, and Jehane Noujaim’s ground-level account of the Arab Spring from 2011 to mid-2013 in Cairo’s Tahrir Square has heart, wit, poetry and fire. Beginning after the fall of the thirty-year reign of the dictator Mubarak and continuing through the military overthrow of the elected Muslim Brotherhood president in summer 2013, Noujaim’s staggering, suspenseful sixth documentary feature is a tumultuous assay of events in the Egyptian Revolution, partially due to the devotion of Noujaim and her crew (producer Karim Amer and cinematographers Muhammad Hamdy, Ahmed Hassan and Cressida Trew and multiple editors). But the greatness of “The Square” lies in its cast of characters—charismatic Ahmed Hassan, young, working-class and an enthusiastic guide to Tahrir, actor Khalid Abdalla, Magdy Ashour from the Muslim Brotherhood, human-rights attorney Ragia Omran, filmmaker Aida El Kashef, songwriter Ramy Essam, photographer Khaled Nagy—a bristling batch of activists whose defiance, elemental humanity and enduring hope shine and inspire. They, the people. Another key element of “The Square” is the fleet illustration of the ways they go about militating for change: “The Egyptian revolution was characterized by the instrumental use of social media, text messaging by protesters, and citizen journalists who were trying to bring about political change and democratic transformation,” the filmmakers have written. “Our film follows characters who reveal how these types of media act as effective tools for providing a virtual space for assembly and supporting the capability of the protestors to plan, organize, and execute peaceful protests.” An earlier version premiered at Sundance 2013, where I first saw the film, and it received the Audience Award for World Cinema Documentary. The grace of the final cut—as history continues to alternately simmer and blaze in the Middle East—almost obliterates the memory of what I saw that January. The camera moves through and with the crowds, on streets and in cafes and in apartments, and from high above, a bird’s-eye view of the humanity-massed square, including a remarkable perspective captured this summer, when a news presenter intones, with only a scintilla of exaggeration, the “largest demonstration in the history of the world.” Their faces are seen, their voices are heard. The urgency galvanizes. This is revelatory filmmaking. 91m. (Ray Pride)

“The Square” opens Friday, January 17 at Siskel. Do watch the trailer below.