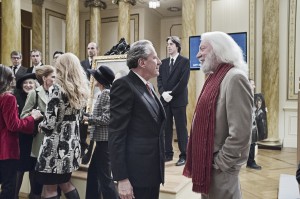 Giuseppe Tornatore’s eleventh feature, “The Best Offer,” (La migliore offerta) mingles spunk and mildew in its melodramatic take on a wealthy, solitary art expert and auctioneer, Virgil Oldman (Geoffrey Rush), turning to fraud late in life, at his sixty-third birthday, over, wouldn’t you know it, a young woman (Sylvia Hoeks) who has an estate to be settled. Mysteries coil from every conversation and encounter; the story’s scaffolding will shift with the slightest wind. Tornatore’s customary flourishes abound: His camera remains as high-strung as his eye for furnishings stays cool. There are pricey or picayune details everywhere, down to the ever-shifting state of Rush’s hair. Rush begins at louche and arrives at lovingly ripe: as ever, he’s a clown of Shakespearean largess. He gets Tornatore’s joke, and how to dance along a line to keep it from devolving into camp, no matter how many things pile up: forgeries, automatons, wax cylinders, vast rooms with high walls clotted with centuries of purloined portraits of women: no end, no end to the detail. Jim Sturgess is on hand as a mechanical whiz, and Donald Sutherland’s snowy beard makes an appearance along with Sutherland, who plays a painter friend of Oldman’s. The hodge-podge of stuff remains watchable, if slightly in the shadows from the bonkeroo rendition of art-world shenanigans in Danny Boyle’s self-immolating “Trance.” (As well as the sixty-fifth birthday melancholy on display in “The Great Beauty.”) Comparatively, as thrillers go, “The Best Offer” is a forgery of catnip. The Morricone-esque score is by Ennio Morricone. 131m. (Ray Pride)

“The Best Offer” is now playing at Siskel through January 30.