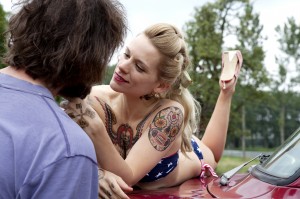 “Beards, bluegrass,” I start, and my friend frowns, “tragic and perhaps doomed romance”—“Okay, now keep going,” she says—“plus a female protagonist who has her own tattoo parlor.” “I’m in!” she says.

A melodrama about modern romance, bluegrass, tattoos: that had been the description that left me less-than-curious about Felix van Groeningen’s “Broken Circle Breakdown” as it toured the film-festival circuit over the past year. But expectations are there to be trumped, and then exceeded, when a story is well told by a good filmmaker. (Indeed, the day after I saw “Broken Circle,” it was nominated for a Best Foreign Language Oscar.) Based on a 2009 play, “The Broken Circle Breakdown featuring the Cover-Ups of Alabama,” Groeningen’s feature betrays a literary bent, in his rhyming of incidents, visual motifs and pregnant symbols that belie its stage origins. It’s continually surprising, and feels fresh in the way the film toys with expectations that come from familiar particulars.

Groeningen shatters time across the story’s seven or eight years, from the moment blonde, inked, scarily intent Elise (Veerle Baetens) and big-eared, big-toothed, wild-bearded Didier (Johan Heldenbergh) fall in love at first sight at her tattoo shop, which he stumbles into almost by accident. (Like most every other element, that location will have another scene that rhymes punishingly with the first.) When desire or admiration flickers across Baetens’ features, it’s convincing and thrilling and not a little scary. Sometimes we’re tossed from the beginning to the end with only a small cue, like a piece of clothing, to remind us where we are, but Groeningen will then orchestrate a second piece of information that confirms where we are, that demonstrates some piece of the fragile puzzle of the romance and marriage and childbearing of this contemporary thirtysomething couple in what appears to be a modest-sized Dutch town.

Winningly, Groeningen integrates the bluegrass music into the drama, keying off emotions, shifts in perspective, in attraction of protectiveness, rather than wallowing in its twangy whiff. Elise joins Didier’s bluegrass band, and her voice is lovely. They both have an idea of other places, other times, which the bluegrass typifies—he sneers at her mention of Elvis and counters with Earl Monroe—and America is a ghostly other to them. What seems a peculiar invocation of 9/11, including a speech by George W. Bush, turns again later in the story, sending one character into a frenzy about politically-charged decisions about the lives of families: America is not as lovely as a song, the couple discover.

The fractured time scheme isn’t as radical as in a film like Alain Resnais’ “Last Year at Marienbad” or even Steven Soderbergh’s “The Limey,” but instead uses its formal play to create a kind of looping present tense of the period of their relationship. The effect’s more emotional than experimental, and prompted more than a few “wow”s at the punch of the bold patterning. Groeningen’s sensibility may be closer to that of Tom Tykwer, slowed, calmed, from his example in movies like “Winter Sleepers,” “The Princess and the Warrior” and “Run Lola Run.” Sensation: how does it sear the memory? Desire: how does it cut through hesitation? Disappointment: how does it poison the language between two lovers? But the romance plays out more in the cadence of a sad, sad song than in such propositions. There is refrain and then a return to the moment: but first love, first disappointment return as refrain. It’s all about love: from start to finish and the plot particulars offer no clue to the craft, the ache, and the tensile portrayal of a man and a woman who just don’t know what to do.

You have to love Elise and Didier even when they do terrible things. They don’t mean them. The songs say it better than they ever could. “Broken Circle Breakdown” ends with a communal song in a confined space, not a dirge, but with hushed voices raised in envoi, and Groeningen’s camera trickles down to pick out one last, final, lasting image. It all comes full circle. It’s all about love, down to a single, simple image that breaks the heart. Skin to skin, ashes to ashes, ink to skin, till death do us part. As the last image faded, I could only say, choked, “I’m in.”