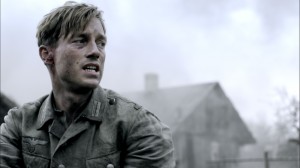 Philipp Kadelbach’s nearly five-hour German television series, “Generation War,” follows five childhood friends as they tumble hopefully into the maw of World War II. Soapy, violent, despairing, but also unapologetically melodramatic, often ripe but always juicy, its one strength is in displaying brutality at all levels of the Thousand-Year Reich, down to each and every soldier. The danger, then, of course, is that these individual soldiers, embodied by attractive young actors all, are then given a twenty-first-century sense of themselves that doesn’t always ring true in an era that has almost no witnesses left. While it’s not situated in the storybook fairyland of “The Book Thief,” it is still discomfortingly picturesque at too many instants and perhaps just a little too sentimental about the era of the War. With Volker Bruch, Tom Schilling, Katharina Schuttler, Ludwig Trepte, Miriam Stein, Christiane Paul, Sylvester Groth,  Gotz Schuber. 279m. (Part 1, 131m; Part 2, 148m.) (Ray Pride)