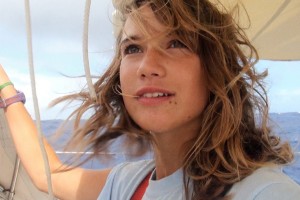 What on earth is this Laura Dekker? A casually tossed descriptor of “old soul,” is good, except she’s also a  New Zealand-born, Dutch-raised fifteen-year-old who fights a year-long legal battle to be allowed to be the youngest person to ever traverse the world’s seas solo, helming a thirty-eight-foot ketch all on her own. Bold, brave, stubborn? Director Jillian Schlesinger discovered the subject of her first documentary feature, “Maidentrip,” while reading about Laura in a New York Times op-ed about the pitched controversy around her hoped-for adventure, “How Young is Too Young to Sail Around the World?” But not only does Schlesinger catch up with her in ports of entry, Dekker records herself, from South Africa to Australia, to Polynesia, the Canaries, the Galapagos. Rushed with cold gray rain, planning routes that avoid known pirate lanes, called “adventurous but not reckless,” she’s just herself: a teenager. But, to use a hackneyed phrase, her “sense of adventure” in this extraordinary assemblage of events on her 25,000-mile journey, Dekker pounds the overscaled, would-be lyrical-la-la of Ben Stiller’s “The Secret Life of Walter Mitty” into the sea, crashes it, smashes it. The first-person confession diary entries to camera seal the deal: all is not lost when a thing is done through personal exploration more than through self-display.  81m. (Ray Pride)