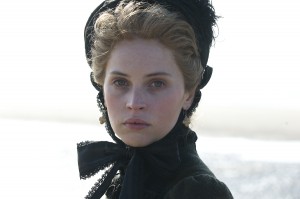 Fiennes is fine: “The Invisible Woman,” Ralph Fiennes’ delicate, deliberately-paced second feature as director, chronicles the true-life romance between Charles Dickens (Fiennes) and a younger woman (Felicity Jones). Fiennes’ eye is acute on the niceties of the costume drama, capturing character with the crown of a hat, the jut of mutton-chop sideburns, the plump way a certain kind of woman would sit, the weight of water against fabric, the light in Jones’ eyes: compelling but opaque at seaside or by tallow-light. “The Invisible Woman” makes a plausible romance, with fiercely detailed performances by the pair, but it also makes a reasonable argument to preserve a certain stolid fashion of British heritage filmmaking. Cinematographer Rob Hardy’s lighting extends the line of moody images he’s provided by films as diverse as “The Forgiveness of Blood,” “Boy A,” “Shadow Dancer”. Screenwriter Abi Morgan (“Brick Lane,” “The Iron Lady,” “Shame”) adapted the novel by Claire Tomalin. With Kristin Scott-Thomas. 111m. (Ray Pride)