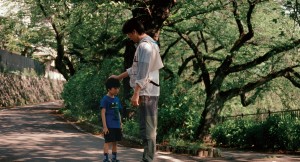 (Soshite chichi ni naru) Kore-eda Hirokazu returns to the subject of, well, fathers and, well, sons, with the same painstaking, observant, delicate hand as in earlier gems like “Still Walking” and “Nobody Knows.” His constant element of children living apart from their families also rises up: “At what point does a father truly become a father?” the director asks in a director’s statement, and his often-witty film is an attempt to unravel that perplexity for himself, through the device of babies switched at birth. Six years later… The niceties and quiddities of domestic melodrama are respected and enriched. Observant, low-key, deeply moving, “Like Father, Like Son” is another in a remarkable run of humanist essays by the Japanese master. A Spielberg remake has been mooted, but as with other plans to Americanize Kore-eda, it’s just not going to happen. A jury prizewinner at Cannes 2013. With Fukuyama Masaharu, Yoko Maki, Lily Franky. 120m. (Ray Pride)