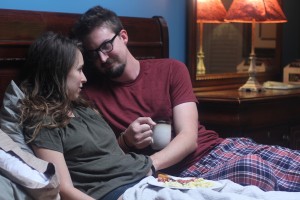 In the Georgia-shot thriller pastiche, “24 Exposures,” veteran Chicago writer-director Joe Swanberg again questions the role of the artist versus those who are depicted via the story of Billy, a death-fetish photographer (Adam Wingard) whose path crosses that of a suicidal solo cop (Simon Barrett). While Swanberg has invoked the example of 1960s Euro-thrillers, “24 Exposures” hews closer to other cited influences, 1990s “Skinemax” thrillers and the boldly colored and plainly sexual work of Zalman King and the breast-baring films of Russ Meyer. Swanberg’s attraction to bold fields of color, such as in one wall in a room painted a hot, unlikely color, is akin to King’s sweetly marzipan sense of design. And the skin—the skin in “24 Exposures” is ample, both in Billy’s grue-strewn shoots and in sexual encounters with his girlfriend and the model of the day. The threesomes are fumbling, genial, hardly acrobatic. In a cut that Hitchcock would murmur quietly at, Swanberg straight-cuts from the intertwining of pale pink female calves to the next morning, where similarly patterned, undercooked bacon burbles in a pan.  Based on the images we see, the nose-twitching Billy is crafting a range of personal, offhand smut. He’s no Richard Kern. (Asked to describe his work, Billy demurs: it would be pretentious, he says.) Honestly, the most disgusting effect is how many bowls of cereal are eaten; others may note the dirty soles of the models’ feet.  (There’s also a moment at a good-looking restaurant where Billy sits down at the bar and his ugly underwear is showing.) A jealous boyfriend comes into the mix, pushing the film to its strange conclusion, including the line “I think if we can liberate you from the facts of the case.” The crime of the characters, it turns out, is transgressing personal boundaries rather than societal ones. And the worst crime is always when you piss off the wrong goddamn guy. The wall-to-wall score is credited to Jasper Lee and James Francis Swanberg. With Caroline White, Sophia Takal, Helen Rogers, Caitlin Stainken, Lydia Hyslop. 75m. (Ray Pride)