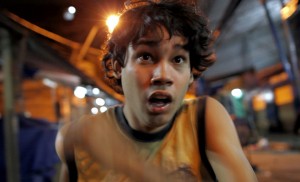 (7 Cajas) An urban chase movie of velocity and careering beauty, and no small energy, Juan Carlos Maneglia and Tana Schembori’s Paraguayan “7 Boxes” follows Victor, a seventeen-year-old street hustler, through Asunción’s largest public market, eight teeming city blocks full, as he meets characters, battles obstacles and moves headlong, largely with his trusty wheelbarrow, to deliver seven mysterious boxes so he’ll have the cash to buy himself a mobile phone. “Run, Victor, Run!” you think after awhile, along with fleeting evocations of other art-house candy-bombs like “City Of God” and “Slumdog Millionaire” as well as secondhand memories of many, many videogames. The best thing, however, is how “7 Boxes” rises above influence, cannily escalating stakes and narrative twists with each successive scene. Even the raft of potentially annoying confidences are delivered within the overall logic of the chase and the space. It’s a premium rush. With Celso Franco, Lali González, Nelly Davalos, Katia Garcia, Victor Sosa. 99m. (Ray Pride)