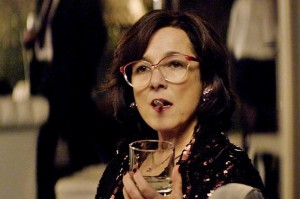 Santiago: the modern day. Gloria, a Chilean divorcee in her fifties, is at a dance club for single adults, pisco sour at the ready. She has a sly, crooked smile and looks out at the rest of the room, filled with women and men her age or older, watching from behind oversized, almost goofy glasses that would have been fashionable in… did you say the 1970s? Donna Summer’s “I Feel Love” comes on, and she dances, in the room, to the room, certainly, but mostly for herself. She’s ready for romance and ready for whomever, whatever may come her way. In “Gloria,” Sebastián Lelio’s near-flawless, high-spirited comedy-drama (his country’s entry for the Best Foreign Language Oscar), the stellar Paulina García possesses her character with grace and humor at the center of each and every scene. García works with simple, specific gestures: she’s breathing Gloria, and so are we. Gloria seems sweetly ordinary at first glance, but García makes her an extraordinary star in her own light. Lelio has giddily compared Gloria to Rocky, and I won’t object. Small, personal triumphs can precede the prizefight of your life. The music is plentiful and generous, especially a bossa nova, “Waters of March” by Tom Jobim that spins the movie into further ethereal heights at the most ordinary of moments. We’re inside Gloria’s life all the time, and the music puts us in her head, or daresay, her heart. As a former naval officer who may or may not be an ideal choice for the love of her life at this time of her life, the stolid but slightly soft Sergio Hernandez is also splendid.  (“Are you always this happy?” is his inspired pickup line.) There are hints of Chile’s politics past, as well as the activities of the younger and less settled, but Lelio allows that element to be part of the film’s fabric. Personality, a person, Gloria, is the film’s fully justifiable focus. Maturity is seldom depicted with such dignity, charm and extemporaneous-seeming behavioral grace. Umberto Tozzi’s Italian pop song, “Gloria” packs a fine wallop at just the right moment. García was Best Actress winner at the 2013 Berlin International Film Festival. With Diego Fontecilla, Fabiola Zamora, Alejandro Goic, Antonia Santa Maria, Coca Guazzini, Marcial Tagle. 110m. (Ray Pride)