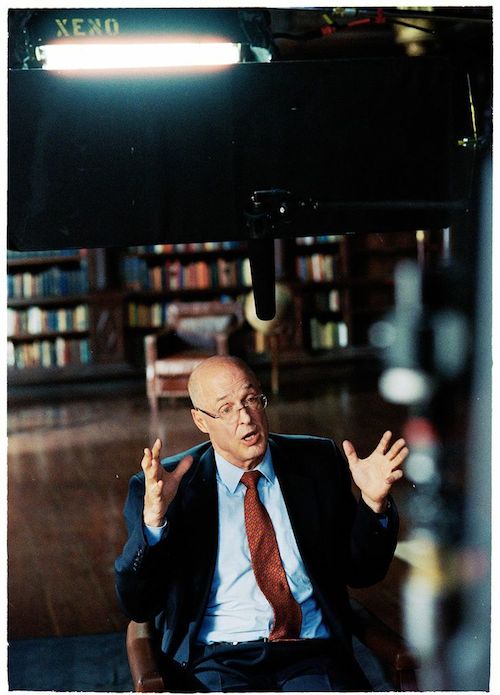 “Hank: 5 Years From The Brink” is a fine, stern-gazed, gleaming slab of nonfiction from veteran documentarian Joe Berlinger, but it won’t make you like his subject, “Hank” Paulson, the Goldman Sachs banker-turned-Bush-Treasury Secretary whose actions as both executive and cabinet secretary were part of the lead-up to what happened with the U.S. and, by extension, world economy with his make-it-up-as-you-go-along actions. (Call him “Too Big To Care.”) Providing us with testimony from his wife doesn’t make up for a more densely detailed overview of the 2008 crash of the world economy. The limited focus is understandable, being a commission by Bloomberg BusinessWeek as its first feature-length media project, but it remains unsatisfying, especially coming from a filmmaker of Berlinger’s talents. (His earlier films include the co-directed “Brother’s Keeper,” “Paradise Lost” and “Metallica: Some Kind of Monster,” as well as the still-litigating “Crude” (2009), a fierce look at the Chevron’s corporate behavior in Ecuador. Chevron sued to take possession of 600 hours of Berlinger’s work video. “Some Kind of Monster” would be an apt alt-title for most of Berlinger’s roster of films, from society misperceiving protagonists as monstrous, to the monstrous behaviors of corporations as well as corporate chieftains. Errol Morris’ approach to one-person interrogations, the Robert McNamara-centered “Fog of War” and the snowflake-barrage of Donald Rumsfeld in the upcoming “The Unknown Known” prompts eddies of behavior that reveal small, fluttery flaws in the facades of his subjects. Paulson, raspy, twitchy, pretending to modesty amid relentless display of self-proud memory, just comes off as the dick you’d expect him to be from earlier pronouncements, the public record and the work of various journalists that have earlier detailed his peremptory behavior, endless presumption and bragging upon his tendency to vomiting and dry heaves. Come to think of one, the best one-man show around this subject matter would be a lesser-known but more pungent work, Chris Smith’s “Collapse” (2009): his central figure’s conspiratorial weave of world events is far more provocative, and even valuable, than the self-flutterings of any flock of Paulsons and Paulsonettes. The bits and pieces of what went right rather than wrong through Paulson’s non-analytical lunges at fixes of the economic system are of note, but the personal background is just window dressing of a dull order. Bloomberg Businessweek’s  issue-length look-back that accompanied the VOD release of the film is very good, and  contains this self-told tale, “Early on at Goldman Sachs someone said, ‘Hank isn’t that smart. What he really does is just assimilate and absorb information from others.’ I took that as a huge compliment. I worked with many CEOs there, some really good, some not so good. I worked and advised heads of state, government leaders. What I learned was that there’s no perfect leader. Everyone is flawed, and their strengths are usually the opposite of their weakness. ‘Hank is candid; Hank is indiscreet.’ ‘Hank is decisive; Hank acts too quickly.’ The essential ingredient to the success of these CEOs was the team they put around them. If you don’t put people around you to compensate for your flaws, these big jobs always uncover them.” Paulson in third person (and in essence): listening to him adds little to who he may or may not truly be. One takeaway: people in power may often have no more of a clue what to do in crisis than those who will never know have power.  86m. (Ray Pride)