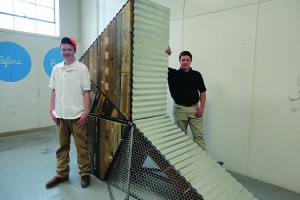 Documentarian Patrick Creadon’s “If You Build It” has more the personality-rich goodness of his first feature, “Wordplay” and less of the questionable rhetoric of his second, “I.O.U.S.A.” Following a year in the lives of a design school for teenagers in the town of Windsor in the poorest county of North Carolina, Creadon has described his film as “’This Old House’ meets ‘The Breakfast Club,’” and that’s a decent description of the welcoming warmth of his story. Two activist designers, Emily Pilloton and Matt Miller teach ten high-school students design basics, then set out to make something with their accrued knowledge. The couple call their endeavor “Studio H,” standing for humanity, habitats, health and happiness.  The title’s elision of the second half of the familiar line from “Field of Dreams” is canny. If they’re any good at what they do, will these kids stay, or will they go? And who would come to what they build? Despite a tendency to tell more than show, the film’s warmth is beguiling. Its hopefulness is tempered by the filmmakers’ cool eye. 85m. (Ray Pride)

“If You Build It” opens Friday, February 7 at the Music Box.