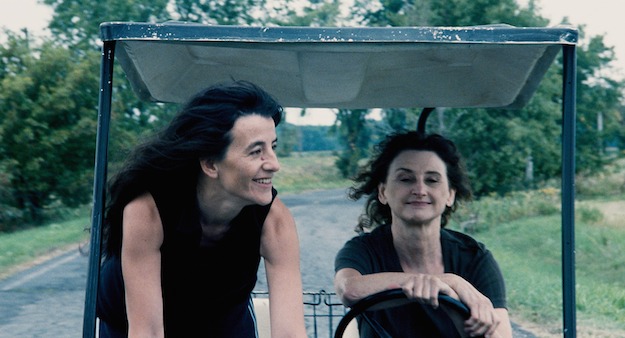 (Vic + Flo ont vu un ours) Denis Côté, killer of genre: in “Vic + Flo Saw A Bear,” the dauntingly imaginative Québécois director turns a brutal hand to a crushingly cinematic love story gone wrong in hinterland sugar shacks of his native province. Shooting in grubby, grainy 35mm, Côté (“Curling,” “Bestiaire”) imagines an anxious, troubled affair between two women, both parolees—Vic, older, harder, sarcastic, controlling (curdled, needy Pierrette Robitaille) and younger, bisexual, still adventurous Flo (the sly-smirking Romane Bohringer)—who had been cellmates. They move into the rural home of Vic’s disabled uncle. Complications are cruel, including Vic’s reaction to the attentions of her comically untraditional parole officer (Marc-André Grondin). Adversity rains down like sour sweat: bursts of lyrical arabesques do little to slow the story’s onrushing toward their fates. The Québécois French is rippling and harsh. “Where are you going to take your uneducated ass?” is one of the kindlier queries. “Horrible people like me really don’t exist,” an antagonist reassures. “But I’m a fucking brute.” Côté is a master of strong compositions, tableaux and little clever setpieces, and his experiments in documentary appear to have sharpened his keen eye. “Vic + Flo” is singular cinema, through and through, a love-that-cannot-last as horror film and decidedly physical love story. He’s as ambitious as Claire Denis, but a little more cartoonish.  Still, the fever dream that is “Vic + Flo Saw A Bear” vaults Côté to the top of any list of current, productive, headstrong filmmakers. The ending is as harsh and bitter and wretched as any movie I can recall, but man, does it pack an uncommon wallop, and finally the slyest hint of emotional redemption. It’s all about love. And neediness. And perhaps the worst possible death you could imagine falling onto deep into the dark woods of Canada. 95m. (Ray Pride)