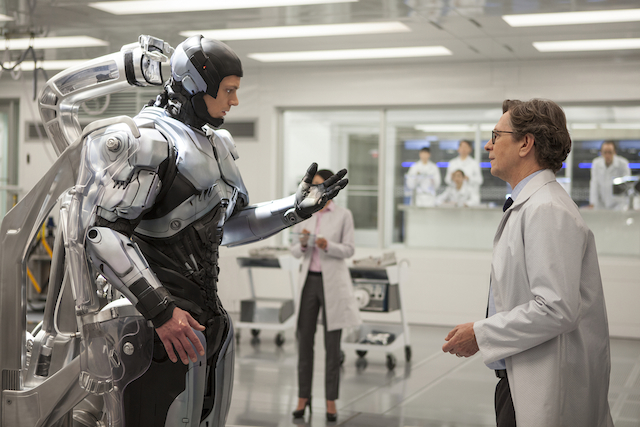 “Why is America so robo-phobic?” José Padilha’s Detroit-set, Canada-shot “RoboCop” is close enough to the letter of Paul Verhoeven’s 1987 satire of man, machine and capitalism as to credit original writers Michael Miner and Edward Neumeier as well as new screenwriter Joshua Zetumer. And while Padilha, the Brazilian director of effective, brutish films like “Elite Squad” proffers the politics of drones, mass media indoctrination and other political hot buttons in blunt fashion, the Dutchman beats the Brazilian on intricate, ironic execution. Set in 2028,  “RoboCop” is bookended by the all-heat-no-light “The Novak Element,” with hectoring, disingenuous speeches delivered by Samuel L. Jackson’s telegenic stooge filibustering for the United States to no longer be the final nation allowing drones and robot police. The words—virtuous, angry, nearly ironic, merely on-the-nose, taking on provocative contemporary topics, simplistic execution—are rife with topicality but wan when it comes to satiric pungency.

The post-9/11 badinage is hardly even a flicker of Stephen Colbert’s most offhand wit. OmniCorp machines are blowing shit up in “Operation Freedom Tehran,” but the Senate still can’t be convinced. But how can OmniCorp earn its deserved multibillions of extra profit? Put a human face on it, or a damaged human inside it. Before we arrive at damaged cop Alex Murphy (Joel Kinnaman), there are glimpses of trauma reconstruction, much more extreme than the many surviving veterans of multiple tours of Iraq and Afghanistan. But for worse and for worse, the crucified-Christ metaphor so beloved by Verhoeven is underplayed for some damp family dynamics. The invocation of  “Holy Christ, holy Christ, holy Christ, there’s nothing left” by Alex glimpsing how little of his body remains, is the closest the remake comes to Verhoeven’s savior-centric take. The larger action scenes are curiously lethargic and semi-comprehensible. (And, as in the history of the last thirty years or so of larger-scale action movies, far too much happens in the confines of one dark warehouse space after another, to the point of one “RoboCop” melee being pitched in total darkness, but for lasers and zinging bullets. Joel Kinnaman is quietly taut in and out of the tin can, but the performances that keep the superfluous tale afloat come from older actors with their small tender niceties, including a gently lasery Jennifer Ehle, as well as Michael Keaton with a complicated suite of tics and the delicate shadings of Gary Oldman’s empathetic American voice, a little hoarse, a little menschy, then more forceful as temptation takes the doctor nearer to sin. When Oldman intones a passage like  “Alex is a passenger, he’s just along for the ride… It’s the illusion of free will,” you hope, fruitlessly, for the film to deliver on its sporadic smarts. There are a handful of neat images: post-explosion, the crushed, burning hulk of metal next to the crushed, burning body that will become a hulk of metal as well and a maquette of the RoboCop suit, skeletal like a Giacometti inside a glass case in OmniCorp’s conference room. The more high-art trappings include a tracking shot along a long assembly line in a vast Chinese factory, neatly pilfering the sustained opening take of Jennifer Baichwal’s “Manufactured Landscapes” and most showily, a large-scale Francis Bacon on display behind Sellars, the “Triptych Inspired by Oresteia of Aeschylus, 1981,” with human flesh in boxes, bruised, spines distended above shoulders, torsos blanched. Production designer Martin Whist says in the press kit, “We had a subtext reference of Bacon, who was concerned with the man and the psyche trapped within the constructs of society. That’s a very strong metaphor for the RoboCop story.” Maybe a strong metaphor for the RoboCop story that Darren Aronofsky never got to make? With Abbie Cornish, Jackie Earle Haley. 108m. (Ray Pride)