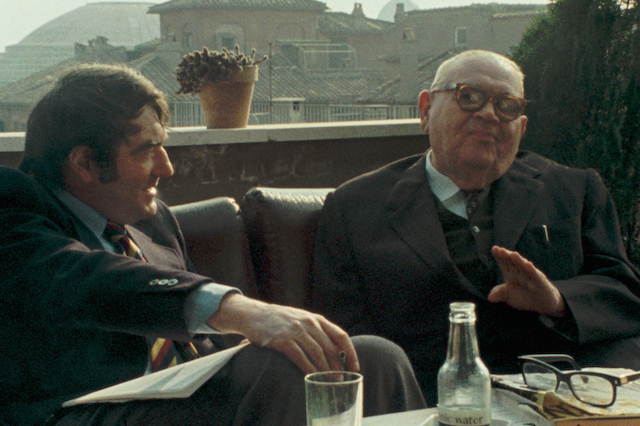 Claude Lanzmann’s “Shoah” runs 613 minutes, so why wouldn’t a big chunk taken out of it be possibly the longest outtake in film history? “The Last Of The Unjust” is partly a conversation with the last President of the Jewish Council in a Czechoslovakian ghetto. The eighty-eight-year-old director’s sustained conversation, shot in Rome in 1975, is with Benjamin Murmelstein, who collaborated with the Nazis during World War II, working directly with Adolf Eichmann in the death camp at Theresienstadt, which was considered the model concentration camp. As the distributor’s notes simplify, “A rabbi in Vienna, following the annexation of Austria by Germany in 1938, Murmelstein fought bitterly with Adolf Eichmann, week after week for seven years, managing to help around 121,000 Jews leave the country, and preventing the liquidation of the ghetto.” Lanzmann, however, does not rely simply on the mercurial personality of Murmelstein, but in the present, visits the sites of which they speak at length. Novelistic heft, yes, but also a dense portrait of one man’s complex, contradictory actions, as well as of another’s dogged persistence as a chronicler of the porousness of what we call “the past.”  220m. (Ray Pride)

“The Last of the Unjust” opens Friday, February 21 at the Music Box. The trailer is below.