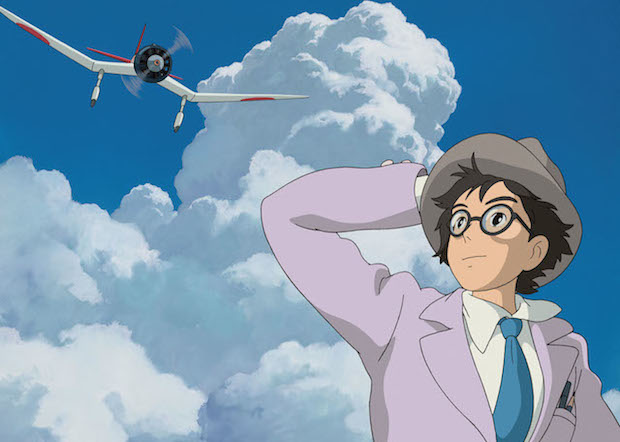 (Kaze tachinu) “Airplanes are beautiful dreams.” Possibly the last film by seventy-three-year-old Japanese master animator Hayao Miyazaki, the sober, regret-steeped “The Wind Rises” is a period drama, a dreamily romantic recounting of the life of Jiro Horikoshi, the aviation engineer who designed the Zero fighter, the plane that Japan thought would win them World War II, and was used for kamikaze attacks and at Pearl Harbor. It’s an honorable treatment of a subject that drew some fervent criticism early in the awards season. Fire and firestorm, wind and clouds and windstorms, sky and planes, are all gorgeously rendered in the fine line of Miyazaki’s virtuoso hand-drawn style. (The sound design, as always, is as gorgeous as the images.) The savor that remains after is the unique look and feel of Miyazaki’s work, but also the pungency of the portrait of the dreamer who sees only his dream, and not always the presages of the world falling down around him. Joe Hisaishi’s score is, as usual with his work for Kitano and Miyazaki, measured and lovely. “The Wind Rises” is Oscar-nominated for Best Animated Feature Film. As with Disney-Touchstone’s earlier releases of Miyazaki films, the re-voiced version teems with familiar talent, including Joseph Gordon-Levitt, Emily Blunt, John Krasinski, Stanley Tucci, Mandy Patinkin, William H. Macy, Elijah Wood, Jennifer Grey and Werner Herzog.  The film’s PG-13 rating, notably, is credited to “some disturbing images and smoking.” Reviewed in Japanese-language version. 126m. (Ray Pride)

“The Wind Rises” opens Friday, February 21. The U. S. trailer is below.