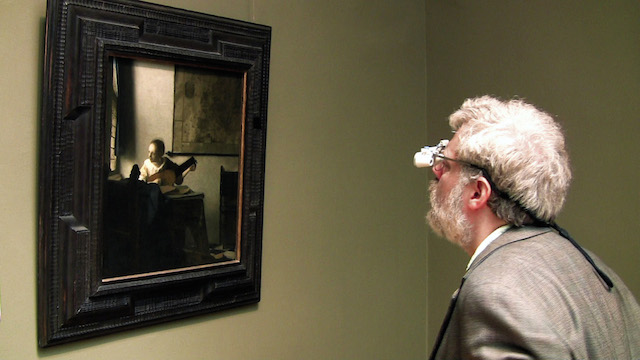 Teller’s documentary, “Tim’s Vermeer,” like Penn & Teller’s long-running cable series, could also be entitled “Bullshit!” Film historian David Bordwell’s enthusiasm for the film is infectious: “Sometimes you sense that a film is made especially for you, and you expect to enjoy and admire it well before you see it…. It involves Penn & Teller, two demigods of mine; it’s about art and technology; and it investigates the possibility that a painter used optical devices to create glowing, mysterious images. In the process, it reawakens the controversy around David Hockney’s thesis in ‘Secret Knowledge’ that many old masters were employing lenses and mirrors to render nature with unprecedented richness. I wasn’t disappointed. It was the most intellectual fun I’ve had at the movies in the last year.” Man, I wish I could marshal that enthusiasm for what’s on screen. I recommend Bordwell’s piece for its keen appreciation, and reaction exactly opposite of mine. In an eight-year endeavor, Teller travels with wealthy Texan inventor Tim Jenison, who believes that Vermeer’s “Girl With A Pearl Earring” could be duplicated by a neophyte like himself, perhaps with the same optical devices that others, including artist David Hockney, have surmised and have attempted to prove were used by the Dutchman. (Jenison’s money came from several inventions in the 1980s for the personal computer.)  Jenison’s travels include a visit to Vermeer’s hometown of Delft, but the film comes down to one dead, dead-end, deadening conclusion: a man with enough time and enough money will always believe that the man with little and less will not possess some spark, some heart, beneath their work, that cannot be duplicated. With Hockney, Vermeer theorist Philip Steadman, Penn Jillette, Martin Mull. 80m. (Ray Pride)

“Tim’s Vermeer” opens Friday, February 14 at Landmark Century. The trailer, which may tantalize you if it seems to your taste, is below.