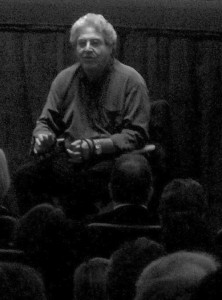 “May he now get the answers he was always seeking,” Dan Aykroyd tweeted Monday, a few hours after the news of Harold Ramis’ death at sixty-nine.

I first met Harold Ramis back in the early 1990s through a friend from Second City, a writing partner, whom the older screenwriter-director had befriended when the younger man was a teenager in Los Angeles. But from our first extended conversation, around the time of “Groundhog Day,” it was clear that Ramis didn’t require  an introduction or connection in order to be generous: raising the temperature of the room, as well as the conversation, working from the top of his intelligence, was just the order of things. Six-foot-two, smile-wincing behind an ursine beard in later years, “The Rabbi,” as his ex-wife called him (see below), was a natural mentor and teacher as much as the fertile comedy mind behind movies like “Caddyshack” and “Groundhog Day.” Whatever the subject, he had something to say, even talking around an unsuccessful movie like 2000’s “Bedazzled.” My conversation with Ramis from the 2005 release of “Ice Harvest,” which is below, holds several poignant and pertinent reflections in light of the Chicago icon’s passing.

“You want to be some combination of Cary Grant, Errol Flynn and Harpo Marx. That was my ideal,” he told Tad Friend in an essential 2004 New Yorker profile. Yet, even in the mediocre snapshot above, he rose above that hoped-for blend that would create the dashing clown: just look at the elemental generosity in his posture, leaning into a crowd of rapt listeners at a Columbia College event. In the New Yorker piece, director Jay Roach described the effect of Ramis’ best work: “You would watch people in the audience just lose their minds. Harold Ramis is the yardstick of what you want to reach for, of people’s bodies around you going into convulsions of joy while your brain is thinking and your emotions are deeply tied in to the characters, and you’re going, ‘Oh my God, This is the best two hours I’ve ever spent.’”

In a splendid 2006 exchange with Eric Spitznagel at The Believer, Ramis said, “I’ve always thought that comedy was just another dramatic expression. I try to measure the amount of truth in a work rather than just looking at the generic distinction between comedy and drama. There’s a lot of bullshit drama out there that leaves you totally cold. And there’s a lot of wasted comedy time too. But when you get something honest, it doesn’t matter what label you give it. Look at a movie like ‘Sideways,’ which is funny and still so painful. It points to the idea that life is full of ambiguity. Most people live somewhere on the spectrum of anxiety and depression.”

Thoughtful, yes, but as both “Groundhog Day” and his many exegeses of its deeper meanings proved, Ramis was simply a seeker. Ramis’ film sets were known for their collegiality. “I consider it my real goal in life, to be happy,” he told me in 2005. Of direction, he says he has little ego. “The real job is to gather all the good ideas from everybody.” Even then, he felt like it was a job he was still learning. “Oddly enough, at sixty years old, ten films, directing for twenty-five years, I still feel like a beginner.”

Ramis said he envied actors. “Actors perform a remarkable kind of ritual service for all of us. It’s a very brave kind of groping they do, and they do it on camera in front of everybody. I told [Second City’s original director] Bernie Sahlins that I couldn’t invest my self-esteem in how others see me. And Bernie said, ‘You can quit acting but that won’t change anything.’”

Ramis’ conversation was compulsively professorial, apothegms formed as jokes. “My ex-wife called me ‘The Rabbi,’ which maybe is why she’s my ex-wife.” Before getting the script to “Ice Harvest,” he said he’d been doing extensive reading, “processing it all, the Torah, Buddhism, CNN.” Focus Features’ then-co-president James Schamus topped Ramis at script analysis, sending a memo regarding a (rejected) bleak ending drawn from the novel. “It was like a tutorial,” Ramis said, quoting the bow-tied screenwriter-executive, “The audience doesn’t need you to tell them they’re going to die.”

More from that 2005 conversation:

PRIDE: Isn’t suspense timing a lot like comedy timing? Something about economy?

RAMIS: That’s probably true. But you know, I’m willing… I’d go out on a limb and say that timing is timing for anything. I’ve always thought that editing a film is like, is like music. And I’m a singer, I actually play and sing. You’re always trying to figure out how to hold that note, how long is long enough and how long is too long. So, uh, yes, the timing in suspense seems to be like comedy, because you want to produce a real result, you’re building toward some release. In suspense, it’s what’s going to be behind that door. How do you time the reveal of something? It’s a lot like timing the punchline of something.

PRIDE: How dark is too dark for your tastes, as opposed to what an audience might expect?

RAMIS: This is not a script I wrote. I chose to do this because I loved the script so much. And when you have a script that calls for someone plunging a hunting knife into someone’s foot, well, you’ve got to deal with that. It’s obviously not going to be a laugh riot at that moment. The question becomes how painful, how graphic, how much blood, what’s John [Cusack]’s response to it? How do I do the fight that’s swirling around them without making it cheesy or fake? I didn’t want it to look like stunt men fighting. Those moments had to be played, all the violence was real and [it was] indicated as real. And yet we knew, we expected, people to be laughing at certain things in the film. So ehhhh… Everything’s discovered. You make all the plans you can. You get it on film, [you hope], from many different angles. [Ramis chuckles.] And many different kinds of distances. And then you start looking at it. And I always say you don’t know where the top is until you go over it. People are always wondering, how do you avoid going over the top? Well, you don’t. You push it and push it and push it and push it and [hope] you have actors who will go there with you. And then you, “Oh no, that’s actually too much, I’m not buying that, let’s pull it back a little.” In the editing room is where you find out what film you’ve made.

PRIDE: The script is strong stuff; I’m thinking of how the death of someone close to a major character is dealt with.

RAMIS: Pretty dark moment. As vile a line as you’ll ever hear. That’s the wisdom and talent of Richard Russo and Robert Benton. I don’t think that moment was in the novel exactly that way or with that dialogue. But y’know, Billy Bob just delivered it well and it’s so nicely written. And there’s not a single punchline in the movie. The actors don’t deliver comedy lines. They just say what the characters say and there’s no winking at the audience. Everyone means what they say and it’s deadly serious.

RAMIS: Oliver, yeah, he is big. I think I first said to him, y’know, my fear… Drunk characters were a staple of the 1940s. Someone talked about [how] we haven’t seen a character this drunk for that long in a film [since then]. How different is… We saw Cheech and Chong, it was different substance abuse, but they played stoned all the time. So we have this souse, and I think for me, he’s written like a Shakespearian buffoon almost, y’know, he’s not just a comic relief. He’s in touch with a deep, deep sadness and frustration that has all of these kind of philosophical ripples. He talks about society—“There’s nothing left for men in this society.” Oliver was deeply engaged on that level. I knew there was a wonderful intellectual process going on for Oliver when he started to play it. I got scared, going over the top. I went back to an old acting cliché: when you play drunk sometimes… Real drunks try to act sober, y’know. And he went, “I know, I know.” But Pete’s all over the place. And like real drunks, and I’ve been with some really great drunks. I don’t drink myself, but… They go in and out. For a while, they’re more lucid and then get a little more tired or have another drink, they’re back where they were before. So he’s all over the place. It seemed appropriate somehow. He was doing it so well and it seemed so endearing. In a movie that’s just so bleak, y’know, as an audience I think we want to feel something good for somebody. I think he’s a terrible man in a lot of ways, he’s weak, his flaws overwhelm his assets, but you still like him. And that’s part of the wonderful thing about Oliver as an actor and also John as an actor. I learned courage from actors.

PRIDE: So what are the big ideas in this one?

RAMIS: I’m always wrestling the whole idea of meaning in life. As I get older it’s become a more important question. When you’re young, you know what life is about. It’ s about making a career, about finding the right woman… or women. It’s about money and power. It’s pretty clear. That’s the map when you’re young. And then you get it or you don’t. You get those things or you don’t. And then you have to… Even if you get them and you find out no one of them or the combination of them is the answer. Right? There isn’t enough money, sex, y’know, good food, champagne, whatever it is, to make you happy. Buy you a little time, maybe, but as you get older, the big questions just keep coming back. And then I started reading more and more in the history of religion and theology and philosophy and psychology. I got real interested in existential psychology as a result of doing “Analyze This,” ironically. So my whole worldview started to change. And then along comes this movie. It shows what life can be like if you live without values, without discovering personal meaning in life. And I don’t think meaning is something that can be given to you or that is derived externally from religion or someone else’s rules. Conventional moralities, y’know. It’s something that every person has to discover for themselves all of the time.

PRIDE: There’s an emerging tradition of bitter holiday movies. This is an odd Christmas.

RAMIS: Well, Christmas is odd, isn’t it? It’s a festival of family dysfunction. It just points out the ironies of everything—people return to the families of origin that damaged them in the first place and everyone pretends it’s okay. Or they don’t, which is even worse like the Christmas dinner in our film. A lot of people are just sick at Christmas. And the ironic contact of, the overindulgence of children, the excessive gift giving to drive the capitalist consumer machine in a world where billions of people can’t find water to drink or anything to eat. It’s kind of amazing.

PRIDE: What’s your advice to aspiring screenwriters or filmmakers?