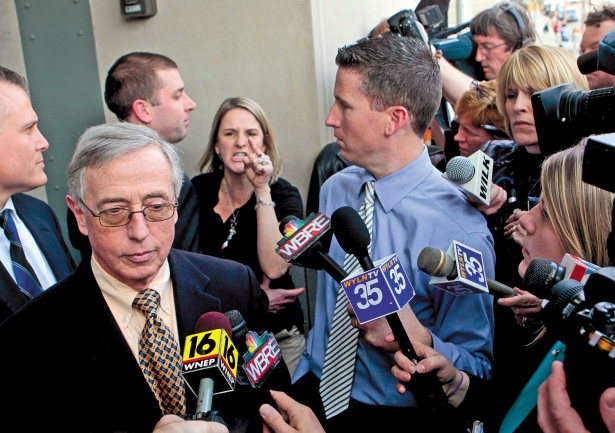 Judge Civarelli is about to hear from a wronged parent.

An investigation of a tragedy beyond ordinary comprehension, Robert May’s first documentary as director, “Kids for Cash” stands out in the daily seethe of stuff that hurts in the world. Was the world always this awful? Is the Internet largely a perpetual outrage machine? Of all the sorts of stories about injustice, indignity, exploitation and sheer gall that litter the data packets coursing across the web, the ones about the mistreatment of children, and the blind eye turned toward bad acts, are the worst. It ought to be pretty simple: you mess with one child, any child, you are messing with the future. Pollute the streams, frack the fields, foul the skies, but when you cynically exploit the lives of kids, such as, oh, a successful and worshiped college sports coach, say, turning a blind eye to child rape? The. Worst. “Kids for Cash” documents a horrific judicial scandal at shocking scale, that of the exploits of corrupt judge Mark A. Ciavarella, a Wilkes-Barre, Pennsylvania jurist who imprisoned over 3,000 children for petty infractions, and who, along with a fellow judge, profited from each and every one of his acts, to the tune of millions of dollars from the for-profit juvenile detention centers where they were dumped. “I wanted them to be scared out of their minds” was one of Ciavarella’s disingenuous proclamations made about the acts that lined his pockets. Director-producer Robert May takes material that on first blush makes one want to spit with fury onto the ground and transforms it into a cohesive narrative, a suspenseful drama that you can only hope has a satisfying conclusion just shy of a public stoning. May avoids the rantiness of this review, for the best: it’s unrelenting even if sometimes ragged. Ciavarella and his colleague Michael Conahan, both unrepentant, appear on camera, another coup. Ciavarella, of course, thinks he’s a victim, and even behind bars does not realize he’s a rationalizing cur. While the film has heroes—this is part of the utility of May’s filmmaking—the conclusions about the juvenile justice system in this country are even more haunting. Anomaly? Macrocosm. 102m. (Ray Pride)

“Kids for Cash” opens Friday, February 28 at River East. The trailer is below.