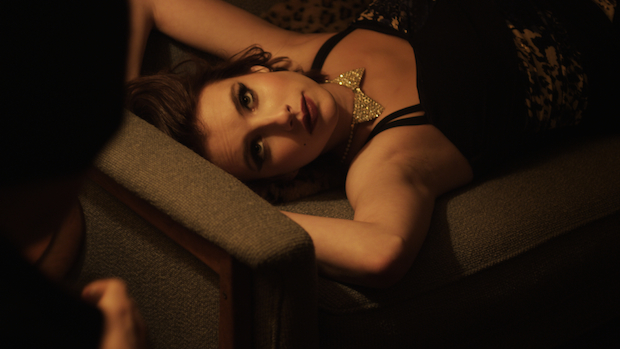 An often-exquisite mess, Scott Coffey’s “Adult World” capably captures the pretensions and confusions of a certain age, in both fond and satirical fashion. Punchy and screwloose, his small satire follows Emma Roberts as virginal twenty-two-year-old college student Amy Anderson, modeling herself after Sylvia Plath, who seeks employment at a beat-down adult bookstore in Syracuse, while pursuing a mentor in the form of a beat-up punk poet played by John Cusack. “You can’t be a wunderkind after twenty-two,” Amy frets aloud.“Adult World” goes all kinds of satisfying places and the lowercase niceties begin with knowing how to use Emma Roberts’ eyes, and their bright, darting gaze, which can flick from irritation to consternation to fury just like one-two-three. Playing the small hurts and large hopes of Amy, she’s tactile and sensitive to touch, a clumsy grownup-in-progress. Cusack plays middle-aged, way-down-on-his-luck unreformed punk poet Rat Billings with rare comic knowingness, at least in his recent roles. I’m fond of Cusack’s commedia dell’arte turn as Richard Nixon in “The Butler,” but while comic, with Rat, he’s captured the dull bruise of a man who’s all but given up, and all but been given up on by society. In one sweet flicker, “Do I look like a doodler?” Rat says to Amy, thinking he’s trilling with condescension, but coming off as the unfinished child he remains, superior but still incomplete. The rough edges of the script, weirdly, add to the charm. The characters say clever things, but also dumb ones, and also horrifying awful and terrifying and true ones. (Amy is extravagant in her self-regard: she’s an ass, but Coffey and Roberts make her a complex one.) Coffey and his cinematographer James Laxton have described their approach to shooting in a small city (on digital with 1970s lenses) as influenced by movies like “Wonder Boys,” “Harold and Maude” and “Margot at the Wedding,” and “Adult World” wears that inspiration lightly and well. On the street and in interiors, “Adult World” feels fresh on screen, but familiar in terms of walking down a small-town street and up stairs into someone’s place. It’s one of the unsung gifts of the shifts in filmmaking technology: so many streets can be traveled with ease in the years and movies to come. With Cloris Leachman, Evan Peters, Armando Riesco. 93m. (Ray Pride)