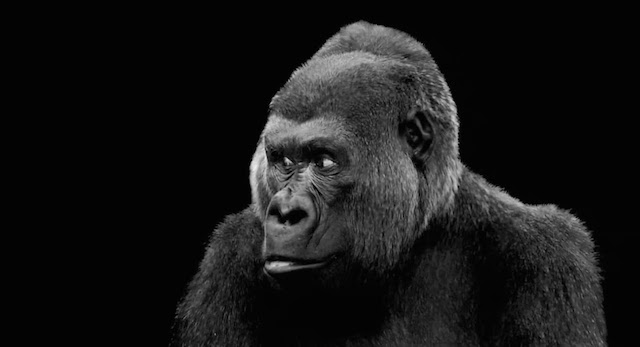 Produced in a retina-searing grayscale widescreen format, Godfrey Reggio’s very, very cold “Visitors” ought to be seen from as far away as possible, perhaps at the back of an orchestra hall where Philip Glass is conducting the score live, or, depending on your taste for this kind of eye-dandy eye-candy, from several blocks away, with many thick walls blocking the view of the latest philosophical staredown from the monk-turned-film-essayist of three decades who compiled “Koyaanisqatsi,” “Powaqqatsi” and “Naqoyqatsi.” In the press notes, Reggio describes one element of his project: “My novice master taught me when I was still a teenager,” Reggio says, “that if I wanted to see that which was most present, most ordinary in my life, around me all the time, that I must stare at it until it looked unusual. And that’s held with me through life.” An accumulation of seventy-four shots (seventy-two of them hidden trick shots) composed in 4K high-definition, “Visitors” begins with a close-up of a female lowland gorilla, Triska, staring toward something, in effect, toward us. Challenging the audience. The close-up of the human (or simian) face, c’est cinema. Many of the best filmmakers believe that movies begin and end with the face. To the rumble and squall of Philip Glass’ reassuring score, Reggio slows the motion of his subjects, alternating with some views of the world outside the frame, encircling the mesh globe of the 1964 New York World’s Fair, the sky a gray field with white clouds rushing, gliding across ruins of urban architecture or Louisiana swamps or holding on a succession of faces. The camera traces faces of clown sculptures in disused amusement parks, perches under harlequin figures as the clouds race to the locomotive urging of the score. A hand fills the screen, as if from the nightmares of Mabuse or from the sky of Angelopoulos’ “Landscape in the Mist,” half-clench poised like a spider, or two hands with filthy fingernails aping the courting dance of two otherworldly animals. There is one epic miniature, when a figure is allowed their own, singular reaction, a small girl with a lightly freckled Peppermint Patty face is allowed to turn away three, four times and return to the digital camera’s gaze, her features dancing with prehensile mournfulness, a sadness, that for once in the film, is beyond words and simmering with emotion. The face of another small girl, a conventionally pretty longhaired blonde who transforms in Reggio’s slowed motion from simple watchfulness into a rictus gargoyle, her side-mouth side grin blooming with potential spite, danger and hatefulness. Staring at “Visitors,” not only do many things seem unusual, many more seem familiar, paralleled by other artists. Aside from familiar quiddities from the “Qatsi” pictures, one’s thoughts could wander to contemporary work by other artists, including Sam Taylor-Wood’s “Crying Men,” Marina Abramovic’s public staredowns, the “silent” interviews of Wim Wenders’ “Pina,” the to-camera address of Tinatin Gurchiani’s “The Machine Which Makes Everything Disappear,” (2013) as well as Thomas Edison’s early novelty shorts, pointing the camera at everything from a kiss to electrocuting an elephant. Then there’s the stoned fury of “Zabriskie Point”‘s concluding shot of slowly pinwheeling pop-art-worthy appliances and comestibles, paralleled here by a wet, heavy gray shot of a roiling garbage dump that is only drab and crushing. Then, too, Abbas Kiarostami’s 2008 “Shirin,” which purports to survey the faces of an audience of women watching a movie at feature length. A sky bedizened with slow-motion gulls against a special effects white sky evokes the M.C. Escher-like effect of sea birds against sea sky in Verena Paravel and Lucien Castaing-Taylor’s “Leviathan.” Another passage resembles Philip-Lorca diCorcia’s 2001 “Heads” series, where the photographer used multiple flashes at strategic points on New York sidewalks to isolate single figures from larger crowds. But, parallel inspiration is not so unusual, and the human face, well, isn’t it the ultimate cinematic subject?  The end credits offer notice of location animals as “feline support” and “canine support,” as well as the unique, cute, not wholly accurate “Filmed in Louisiana, New York, New Jersey and over the moon.” 87m.  (Ray Pride)

“Visitors” opens Friday, March 7 at Landmark Century. The trailer is below.