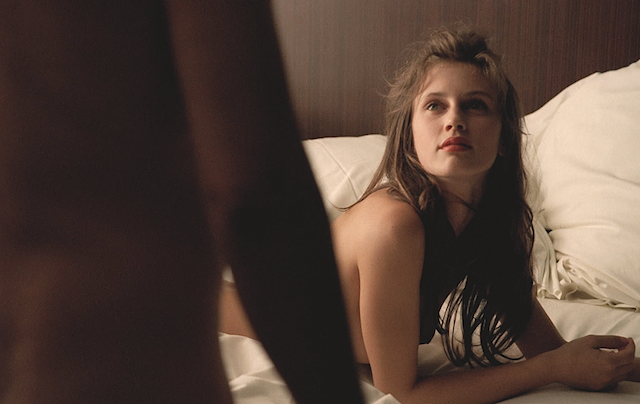 A beautiful French teenager turns to prostitution, no explanation given. A Romanian film director prepares in the days before shooting a film: language is worse groundwork than silence, especially with women. In a dark club, a man must scream, and does.

If there’s one thing in common among the films I’ve been able to sample from the 17th Annual European Union Film Festival at the Siskel Film Center, with sixty-four features from twenty-six countries, it’s simply that the storytelling dispenses with backstory, there’s a lot less about increasingly distant wars of the twentieth century, and that many of them seem like reports of the moment, emotional weather reports, simple, sometimes elegant statements of the state of things.

Of the first three examples, François Ozon’s “Young and Beautiful,” enigmatic seventeen-year-old Isabelle (coolly mysterious Marine Vacth) turns tricks after losing her virginity without satisfaction: very French and of a piece with Ozon’s long line of provocations, its blank surface seems new. In Corneliu Porumboiu’s “When Evening Falls on Bucharest Or Metabolism,” the wry director of “Police, Adjective” cools his deadpan farther, to the point one could make the mistake nothing at all is going on in the give-and-take between a manipulative film director and his actress-mistress. In its sparseness lies endless combat, and inspired comedy. (Inspired, considering he recently told me that the future of Romanian filmmaking looks like “Shit. Just shit.”) In Ben Rivers’ and Ben Russell’s Estonian-French “A Spell To Ward Off Darkness,” two experimental filmmakers collaborate on three episodes that are near-sleepwalks, on an island, in a forest, and in a Norwegian club that includes performance by former Chicagoan Robert A. A. Lowe (90 Day Men, Lichens).

The shifting economics of filmmaking and distribution has created a trend toward local production and consumption of movies across the world, including in Lithuania, where half the local box office in 2013 went to stories that stayed close to home. Among this year’s EU fest’s entries, cultural specificity is a hallmark, and the bromide that the specific will always suggest the universal is in full flower. “It’s always our hope that the festival fills multiple cultural needs,” Film Center director of programming Barbara Scharres tells me. “It’s the home for the new work of many distinct European cultures represented in our [own] regional population, but at the same time provides a pan-European perspective through the increasing number of co-productions. As with all of our festival projects, we aim to fill a cultural need in our region as well as to [offer] an advance look at what we see happening in the wider world of international cinema from our curatorial perspective.” U. S distributors have already acquired an impressive number of films that are in the festival, but, as Scharres points out, “many others are films that may have no other chance for exposure in Chicago or even the U.S.”

Prolific Brit Michael Winterbottom is represented by two films, “The Trip To Italy,” a kind of comedy-documentary of the riffage of Rob Brydon and Steve Coogan, after their earlier “The Trip.” His 2012 “Everyday,” shot across five years, may have been topped for impact by Richard Linklater’s forthcoming twelve-year-duration “Boyhood,” but its quiet observation of the lives of four children as their father spends time in prison, has its own quiet command of the quotidian.

MIA directors who resurface include the great Lukas Moodysson, who returns from the dark with “We Are The Best!” the story of three thirteen-year-old girls who form a punk band in 1982. Neither of Paul Verhoeven’s dream projects, biographies of Christ and Hitler, are on the horizon, but his 2012 “Tricked” is included, a “crowd-sourced” film about a randy businessman who’s screwed over by everyone in his life, including his wife and mistress. Giddy cheer and cynical business dealings: there’s a snapshot of the Europe I know.