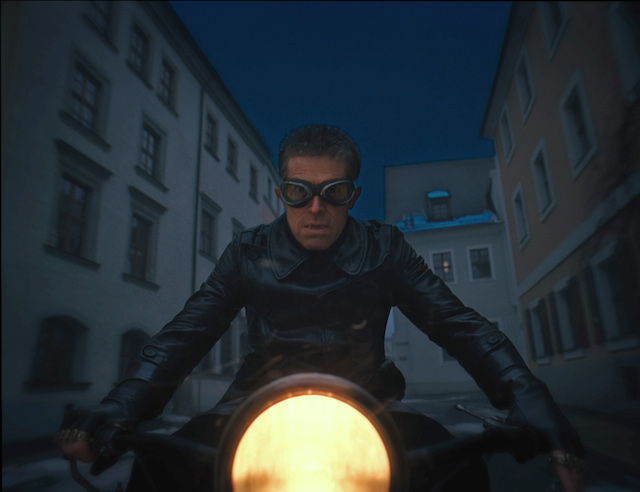 If on a winter’s night, a screenwriter…

Wes Anderson’s dense, compacted, throwback-look forward, comic mock-operetta of a mythic Mitteleuropa seemingly patterned after the no-place/not-home movies of filmmakers like Lubitsch, Lang, Ophuls, Mamoulian and Renoir, who had escaped the onrushing events between the wars in Europe, bursts with influence, overflows with decor, makes whimsy in the reflected light of offscreen historical horrors. Bold balderdash and elevated deadpan, its most ready surface influence would appear to be heady expatriate confections like “To Be Or Not To Be,” and other films of that time that do not stint on looming shadows in faux-European studio settings.

Anderson’s everyman-in-no-man’s-land is Gustave H., the concierge of an ocean liner of a wedding-cake deluxe hotel in the fictional duchy of Zubrowka, The Grand Budapest Hotel. He is a man with a job, if not a surname or a notable nationality. Ralph Fiennes invests H. with the brusque panache of both the boulevardier and the comic lights of the stage. Lubitsch’s blithe cosmopolitanism is supplanted by brute snippiness in the person of Fiennes. Speaking faster than he fast-walks, his H. is given to “oh fuck it”s that are the verbal equal of Indiana Jones choosing to take out a pistol and dispatch a scimitar-wielding opponent. (Fiennes is nourished by H.’s bursts of comic filth.) His impatience, his hurry, accelerates the sense that a narrative, an era, is hurtling to a close, as well as setting the tempo for the heist-and-chase design of the movie.

H. is in a constant state of verbal fury, yet as a figure, he is stateless, without citizenship outside the walls of the hotel, just as the dream design of the film is timeless, set in no place, but sprung from many imaginations. And the vast, teeming cast is as much a relentless rush of footnoting as performance—young Tony Revolori as Zero, the bright-eyed Lobby Boy to Gustave H., escaped from a revolution, F. Murray Abraham as Mr. Moustafa, the mysterious owner of the hotel and the narrator who may have been the boy, Tilda Swinton, Adrien Brody, Willem Dafoe, Jeff Goldblum, Edward Norton, Saoirse Ronan, Jason Schwartzman, Bill Murray, Harvey Keitel, Bob Balaban, Waris Ahluwalia and Owen Wilson, as well as a fantastic fake Schiele painting, its line writhing with tribadic electricity.

Seeing “The Grand Budapest Hotel” a second time only amplified the disorienting sense of frames upon frames, boxes upon boxes, rabbit hole after rabbit hole. Beneath the plastic sensory pleasures of Anderson’s work lies infernal patterning. In the mosaic of leaps between time settings, the film even shifts aspect ratios, from panoramic widescreen for the time nearest us, a middling, common format for the farther past, and for the bulk of the story, at the downfall of the heyday of the hotel and its caretaker, M. Gustave, in the nearly-square “Academy” format in which movies of the 1930s and 1940s were shot and shown.

The story has multiple narrators in multiple time periods, and the play between “writer” and “author” and “reader” and “viewer” begins with Anderson crediting the worldly but melancholy mind of writer Stefan Zweig, who committed suicide during World War II. It’s not an influence many would immediately draw upon, and Anderson himself said he came upon Zweig’s work by chance.  Talking to Zweig’s biographer, George Prochnik, in the Telegraph recently, Anderson is expansive on his deeply literary source: “Two characters in our story are vaguely meant to represent Zweig himself—our ‘Author’ character, played by Tom Wilkinson, and the theoretically fictionalized version of himself, played by Jude Law. But, in fact, M. Gustave, the main character who is played by Ralph Fiennes, is modeled significantly on Zweig as well.”

Prochnik aptly replied that “Grand Budapest Hotel” also partakes of a “grid of multiple overlapping and proliferating story lines.” Anderson agreed, continuing, “We see this over and over again in Zweig’s short stories. It’s a device that maybe is a bit old-fashioned—I feel it’s the kind of thing we might expect to find in something by Conrad or Melville—where somebody meets an interesting, mysterious person and there’s a bit of a scene that unfolds with them before they eventually settle down to tell their whole tale, which then becomes the larger book or story we’re reading.” Which becomes a larger, much different project than the narrative playfulness of a writer like Italo Calvino. Still, the impossibility of recreating the era is reminiscent of another noted writer’s work, that of Jorge Luis Borges in “Pierre Menard, Author of Don Quixote,” in which the “Author” sets himself the task of steeping himself fully in the centuries-past era of the novel’s author in order to replicate the original text, effortlessly, word-for-word. “Pierre Menard did not want to compose another Quixote, which surely is easy enough—he wanted to compose the Quixote. Nor, surely, need one be obliged to note that his goal was never a mechanical transcription of the original; he had no intention of copying it. His admirable ambition was to produce a number of pages which coincided—word for word and line for line—with those of Miguel de Cervantes.”

The success of Anderson’s admirable ambition is to have elevated anachronism, pastiche, personal passions and larger cultural memory to a heady froth, but one that also knows the butt-end of a rifle. After all, a Babel of knowledge is necessary to create the finery of cookies and cake.

“The Grand Budapest Hotel” is now playing at Landmark Century and other theaters.