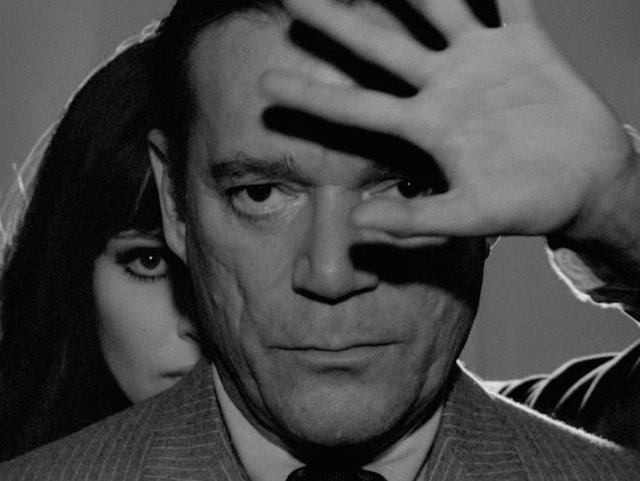 (A Strange Adventure of Lemmy Caution) Fifty shades of grayscale: Jean-Luc Godard’s 1965 “Alphaville” is eternally nouveau, fifty years passé. One of his most entertaining movies is also one of his most timeless. Drawing on a post-Bogart gumshoe character that Eddie Constantine had already smoked and drank his way through in Z-level Euro-thrillers, Godard creates a future landscape entirely from cannily curated elements of Paris, 1964. The City of Light becomes the portal of portent. All you need to make a movie, or at least a nagging, haunt-your-dreams pre-neo-noir, is a gun, a girl and simmering philosophical asides. The shadowy web etched by cinematographer Raoul Coutard’s black-and-white photography is countered by the luminosity of Godard’s then-wife and matchless muse, Anna Karina. Her eyes shine as the corners of the city lurk, mute yet ominously expressive. Fittingly, this object from the past that partook in an imagined future, of an urban dystopia ruled by a brute computer called “Alpha 60,” is newly restored, cleanly pixillated into the present tense of rapid-fire 1-0-1-0-1-0 sequences of data. Look up: it’s still the “modern day.” It’s a newly modern reformulation of the on-the-fly, brusque black-and-white glories of what was once a 35mm film. “Alphaville” is the kind of retro-futurist looking-backward-correctly kind of visual artifact that screens like the Music Box can now showcase in all their glory. Almost fifty years on, “Alphaville” compels like the best Godard, but entertains, too. The original French poster is one of the great, iconic film-fetish objects: I don’t even have a wall big enough for the copy I found of the 1992 French reissue. Just like “Alphaville” itself, even on the largest screen. With Akim Tamiroff. 99m. (Ray Pride)

A DCP of the digitally restored “Alphaville” opens Friday, March 21 at the Music Box.