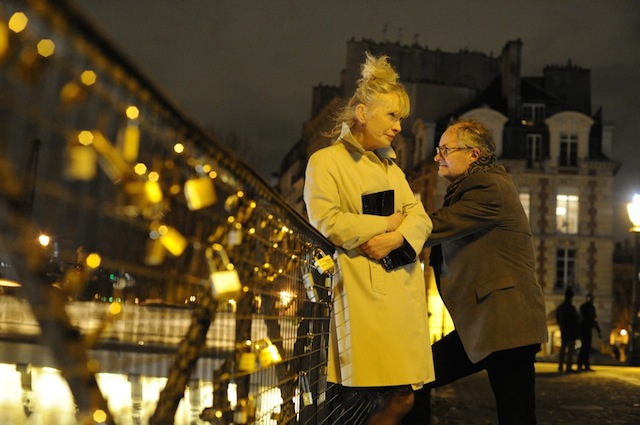 The genial yet barbed “Le Week-end” is another sort of dirty laundry from Hanif Kureishi, the writer of “My Beautiful Laundrette,” and one more piquant take on sexual and romantic intimacy in collaboration with director Roger Michell for the fourth time (after “Venus ,” “The Mother” and “Buddha of Suburbia”). Jim Broadbent and Lindsay Duncan are Nick and Meg, two academics, a long-married, affectionate yet prickly couple who retrace the steps of their honeymoon for their thirtieth anniversary. They also run into an old friend of Nick’s who lives in Paris (Jeff Goldblum, who lives for roles like this in which he can be so effortlessly, mellifluously articulate). All three actors are in their prime here: instigator Goldblum is surpassed by stage veteran Duncan’s snappish, restless fury and by Broadbent’s tenacious melancholy. Nick and Meg’s nostalgia for what was as well as what could have been is reflected most in Meg’s blunt pronouncements, as well as by moments when Bob Dylan and, especially, Nick Drake filter onto the soundtrack. “The unhappy are no good to anyone,” Kureishi recently wrote in the Guardian. “The unhappy are dangerous.” But Meg and Nick, somehow, remaining together, intend not to be unhappy. Once again, Kureishi is near-unerringly precise in the details chosen about the intimacy of relationships sustained long after the bloom of romance. In more lovingly crafted language, he concurs with what studio executive Sam Goldwyn may once have said, “you gotta take the bitter with the sweet.” 93m. (Ray Pride)