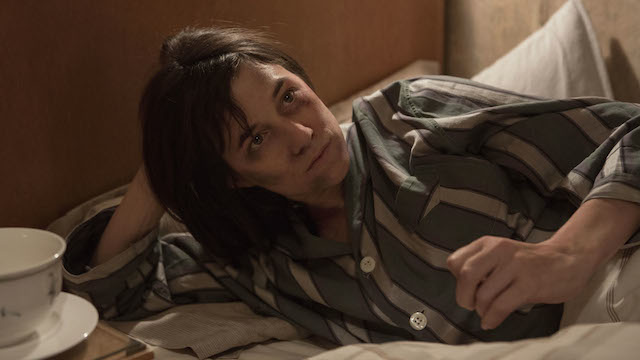 Lars Von Trier’s “Nymphomaniac Volume 2” (rendered onscreen as the internet-unfriendly “Nymph()maniac”) extends the chockablock low-to-high-and-back-again smorgasbord of the first half of the “international version” of his latest provocation. Charlotte Gainsbourg takes center stage as the adult “Joe,” after Sophie Kennedy Clark’s enactment of her memories of sexual initiation in the opening salvo. (Distributor Magnolia Pictures notes, “The international version is the only version of the film that has been released commercially anywhere in the world. There is no ‘American’ version of the film—the film being released in the US has not been altered or censored from the international version.”) The approach remains episodic, with bursts of inspiration succeeded by musings on music and math that on first viewing seem to convolute more than complicate. It’s a novelistic approach that becomes more appealing as the stories unfold. And despite bold imagery and frank chitchat, there’s nearly nothing erotic about either installment. Joe can be as clinical as they come in describing her search to recapture her youthful orgasms. As always with Von Trier, the chill of cogitation rises above the potential for copulation. (“Forget about love” is one of the film’s taglines.) But it’s a seriously funny enterprise by turns, and it’s the rare film, even from the art-house, that takes variables of sexuality sadism and masochism as a serious choice by its characters. Stellan Skarsgård remains convinced he’s acting in a film that’s a hoot, and he’s a useful foil to Gainsbourg’s gently ascetic delivery of her character’s love of wickedness. As Joe says, “I love my filthy, dirty lust.” The five-and-a-half hour “director’s cut” is promised for eventual release; could that bring some kind of clarity to Von Trier’s intentions and his restless cruelty? Even on video-on-demand, “Nymphomaniac” is a movie for the fully alert: it’s not casual viewing. (Among the film’s odd credits are one for Anders Refn, his sometimes editor and father of Nicolas Winding Refn, for “additional directing.”) With Stacy Martin, Shia LaBeouf, Jamie Bell, Willem Dafoe, Mia Goth, Jean-Marc Barr, Jens Albinus, Christian Slater, Udo Kier. 123m. (Ray Pride)

“Nymphomaniac Volume 2” opens Friday, April 4 at Landmark Century and is available on video-on-demand. The U. S. trailer is below.