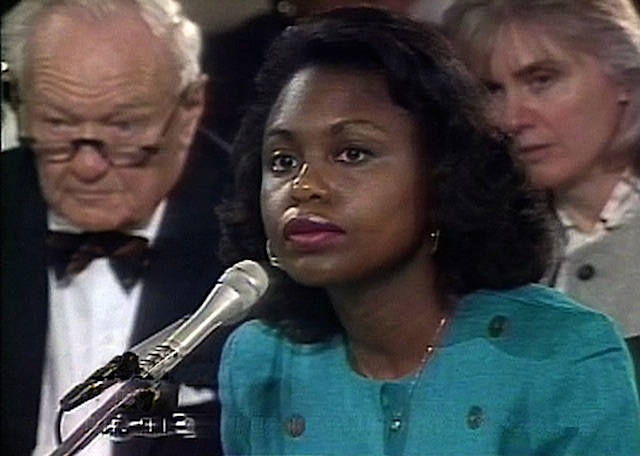 Academy Award-winning documentarian Freida Lee Mock’s “Anita” is an old-fashioned, blunt documentary that shares the straight line of purpose of her earlier work, including “Maya Lin: A Strong Clear Vision” and “Wrestling With Angels: Playwright Tony Kushner.” (It’s the kind of doc that would work almost as well on the radio.) The 1991 confrontation between law professor Anita Hill and a Senate committee began as she outlined sexual harassment charges against Clarence Thomas during his nomination hearings for the U.S. Supreme Court. (We know how one part of that turned out.) Hill talks openly about what led her to testify, and how that affected her own career. Sexual harassment remains an issue, and “Anita”’s shortcoming is how little it reflects the wider scope of how Hill’s circumstances reflected (and still reflects) society at large. However we might admire Hill for her gutsy stand for her truth against Thomas; in the face of the fourteen white men of the committee, heroine worship is only a superficial reading of a compelling history. But, in compiling a straightforward portrait, Mock’s quiet, methodical approach has its rewards. Thomas, citing contravention of his nomination as “high-tech lynching,” won’t be left to history as a man with clean hands. And his choice to have almost never spoken a word from the bench of the Court in two decades-plus is trumped by the assured testimony that Hill continues to provide. 77m. (Ray Pride)