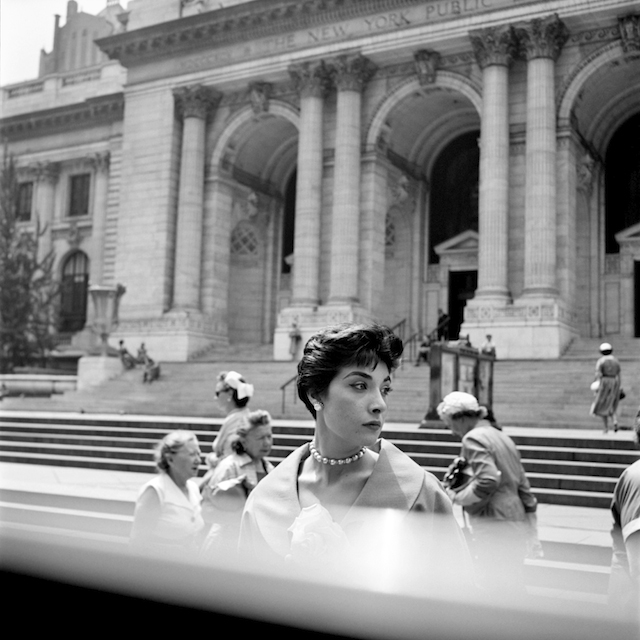 Not a composition of the late, secretive Chicago photographer Vivian Maier is askew or amiss in her vast, breathtaking, even thrilling body of street photography, of which the public has only glimpsed the tip of the iceberg. Yet her life remains curiously unreachable in John Maloof and Charlie Siskel’s brisk documentary. “Finding Vivian Maier” is partly about not finding her: the outsider remains forever distant. The film, executive-produced by Jeff Garlin, collects interviews from those who knew her in Chicago as a nanny who liked having her own locks to her room, but who kept her avocation, indeed, her great vocation, from view. Her cache of more than 100,000 photographs, with some yet to be developed, were uncovered by Maloof while haunting “a local junk and furniture auction house,” where he found and bought a box loaded with negatives. It was simply flea market provender, or worse, the kind of thing some auction houses immediately throw in the trash. Part of the film covers his accumulation of the rest of her work, which is, well, simply great. Surely there are some slipped or rotten shots among the yet-unseen, but those that have been exhibited, collected in books and put on screen here show a fantastic eye and a splendid consistency. There are three or four cases in the film where shots look bad, and they’re ones that have been recropped by the filmmakers for illustrative purposes. “She would never have let this happen,” one of the voices in the film tells us. (While there’s no narration, Maloof, the owner of Maier’s legacy, does excitedly describe and demonstrate the contents of his fantastic find.) As the film’s most intelligent voice, photographer Joel Meyerowitz admires the work, and her “authentic eye, a real savvy” in the work that she took, spy-style, with her square format Rolleiflex camera. “A kind of towering magnitude,” Meyerowitz pronounces coolly. Of her recurring images of newspapers and newsstands, Meyerowitz says, “She was not interested in sweetness and light. She liked headlines that revealed the folly of humanity.” In the end, the title “Finding Vivian Maier” is as much about finding “Vivian Maier” the hidden artist as the tall, cunningly severe yet naturally striking woman in her many self-portraits. Her stark, still features haunt, but nearly so much as the iconic decipherability of her observational gift, and the cleanly captured geometry in the hundreds of posthumous-drawn prints. The fantastic, spontaneous electricity in her fractions of seconds capture the life of her mind more keenly than any of the fractious on-camera testimony about her more aloof and coltish ways with her young charges. 83m. (Ray Pride)

“Finding Vivian Maier” opens Friday, April 4 at Landmark Century. A clip is below.