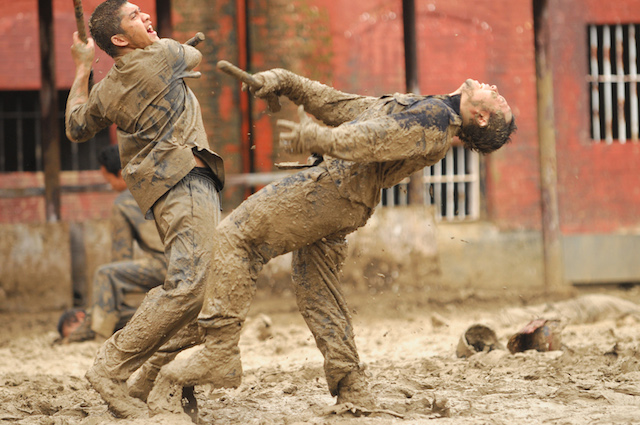 Welshman-in-Indonesia Gareth Evans’ ambition for his third feature, “The Raid 2,” is only to make a “Godfather Part II” all his own, but also with whomping helpings of style from Melville, Kitano, Miike, Refn, Ratanaruang and any volume of thrashing or balletic Asian action entries he or his collaborators have seen but we assuredly haven’t, with extra lashings of his own assured, inventive interpretation of action-in-motion.

Evans specializes in preplanning each and every shot and each and every move to keep each scene to not just plausibility but possibility of man-to-man combat (and sometimes 180-men-to-180-men combat in mud and tossing rain). Shots aren’t repeated and don’t overlap; slow motion is rare. While the film’s bounty of sixteen setpieces goes on at impressive length within the 148 minutes of “The Raid 2” (shown at Sundance 2014 as “The Raid 2: Berandal,” the subtitle that can be translated as “Delinquent,” or “Thug”), the ambition of Evans and his efficiently creative fight choreographer-star Iko Uwais is to create something cool and efficient but also compulsive and explosive.

Beginning only moments after “The Raid: Redemption,” “The Raid 2” sends that film’s cop survivor into a years-long undercover assignment that separates him from his wife and young son and the larger world as well. Intrigues compound and near-genocidal slaughter among rival gangsters over turf and pride and cash bristle for space alongside physically-created but impossible-seeming car stunts and baroque battles that involve a proficient hitman trying to atone for abandoning a child, with filthy feet, fingernails, ratty hair, and unstoppable machete technique. Also: a bat-and-baseball wielding sadist and “Hammer Girl,” a pop-star-looking young woman whose exploits include wrecking the length of a subway car brimming with suited men, wielding a nightmare succession of claw-hammer blows high and low. The scene is dynamic onrushing, filled with joy of geometry but a horror of murderous efficiency. The crunchy, stabby, elevated chop-schlocky rococo has only just begun. 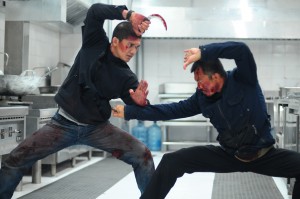 Digitally shot and digitally exhibited, “The Raid 2” exploits low light, on locations, in corners of dark spaces, down blotted alleyways, in crush of day lowering to dusk and beyond. At times, the beauty of the crisp gloom approaches the look of recent movies by Turkey’s Nuri Bilge Ceylan, such as  “Once Upon A Time In Anatolia.” (Not to mention Jean-Pierre Melville’s love of eternal, steely, rainy dawn.)

Action is the focus. Settings are at once naturalistic but are largely reduced to simple elements, such as the wall of the cop’s apartment demarcated only by a couple of framed photographs; a cement wall in a prison cell indented and reddened by repeated smashes of a prisoner’s forehead; or the complicated patterning of a brick floor in a prison toilet where the first fist-foot-limb-twirl-kick-fall action scene flows and rushes forward into absurdly confined space. Blood and mud splurge alike in scene after scene. Rusticated color fields abound. Negative space—emptying a portion of the frame for tension or release—and a casually swirling camera (tracking, booming and the genteel, floating progress of a versatile jib-arm mini-crane) mark scene after scene. The sparks struck are vile and violent and devised in front of background elements and compositions that would impress both Michael Mann and Jacques Tati. (As well as slow-motion drops of water that would slightly elevate at least one of Wong Kar-Wai’s eyebrows.) It’s economy of motion within a plenitude of savagery. Ranging from brutal to cruel to savage to neo-nihilist, “The Raid 2” is even a few choreographed steps beyond the dour, dim canvas of Refn’s “Only God Forgives.”

The subtitled dialogue, without irony, includes the line, “Men who could have lasted longer if they knew where to stop.” At some breathless moments, it feels almost as if Evans thought he might never make another movie, and this would have to serve for all the sequels never to be made. Why ten punches when forty-four will do?

“The Godfather Part II” comparison obtains in a late, extended sequence of crosscutting as adversaries are dispatched, as empire is squelched, that includes a rush of blood slishing tranquilly onto a border of green bamboo leaves. It’s practically bucolic, like the damp skies that no character ever truly raises their eyes toward. The abiding melancholy of “The Raid 2” is that there’s no swagger, no bravura, no false, heroic gestures, just desperate remorseless forward motion. It’s more abounding cinematic slaughter from a country that last year also prompted Joshua Oppenheimer’s “The Act Of Killing.” What does it come to? A man grows very, very tired.