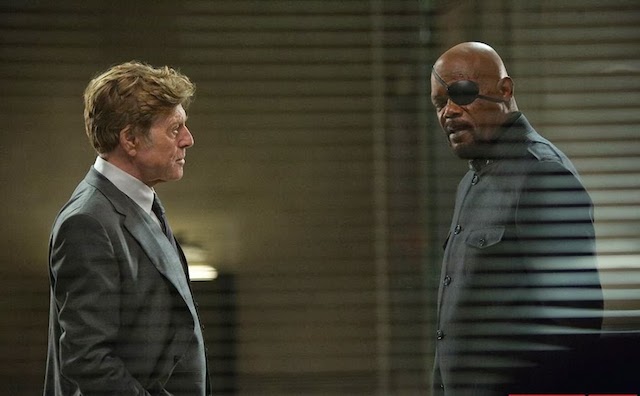 “On your left,” Steve Rogers (Chris Evans) says on a run, rushing past a man who will become one of his closest allies in the warfare to come in “Captain America: The Winter Soldier.” For someone who will never master the intricacies of the “Marvel universe” of cross-pollinated properties and storylines, an almost immediate satisfaction in the fine craft of directors Anthony Russo and Joe Russo (“Community,” “You, Me And Dupree”) came from how closely allied this superhero adventure is to 1970s American movies, down to the superb casting of Robert Redford, the face of 1970s paranoia classics like “Three Days Of The Condor,” “The Candidate” and “All The President’s Men,” as the enforcer of 2010s universal spying on the world’s citizenry. The shiny set of spires on the river in D.C. where the spies-gone-wrong work pointedly faces the Watergate building. Redford’s Pierce is a stand-in for all the nattering nabobs of national security surveillance, with knowing asides to the likes of the NSA’s Keith Alexander, DNI James Clapper, and even up to Obama himself. (Pierce is described as someone who turned down the Nobel Peace Prize, which, of course, Obama did not.) It’s politically contentious, if not downright rambunctious. Movies like “The Parallax View” aren’t being made today, yet Disney-Marvel puts it out there, blunt as ice, the state of privacy politics today, as well as having the only voice of patriotic reason rise from a man whose values were forged in the 1940s. (On your left, indeed.) Despite all the explosive content, it’s the first Marvel movie that felt like a movie-movie to me, unlike the clattering, juddering toybox of storylines, rivalries and kabooms of “The Avengers.” While the action scenes are cluttered, there are a surfeit of small, fun ninja-lithe moves, and the production design has the gleam of twentieth-first century modernity but also the clean lines of classics by the likes of Pakula, with acute frames by day as frightening as shadows within shadows by night. The sweetly skeptical adaptation’s ambitions are credited to Christopher Markus & Stephen McFeely (“Thor: The Dark World,” “Pain & Gain”) and Ed Brubaker. With a beguiling, low-to-the-ground Scarlett Johansson, a crackerjack Samuel L. Jackson, a high-flying Anthony Mackie, Frank Grillo, Hayley Atwell, Jenny Agutter, Stan Lee, an underused Cobie Smulders and a finely-conceived role for Toby Jones. 136m. (Ray Pride)