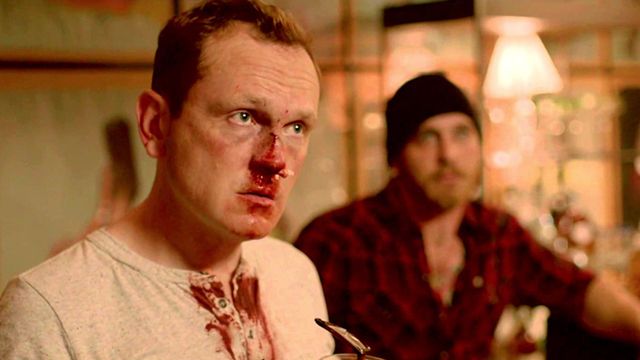 A filthy, nasty thrill ride, “Cheap Thrills” is the rudest defense of Traditional American Values in all too long. Brazen post-Haneke-Pinter-Tarantino misanthropy runs deep in a gutter. Man wakes up in the morning, he’s forgotten his dreams of being a writer, his wife and young child beside him—“The past six months have been amazing, I love the shit out of you”—as he sets out on his work day, finds an eviction notice on the front door over almost $5,000 in back rent, which he crumples on his way to his machine shop job, where he’s quickly “downsized.” So, down to the bar, where he (stolid yet supple everyman Pat Healy) runs into a disreputable cohort of five years back (Ethan Embry) just as he’s had enough of a snootful to face his family. Enter: a couple on her birthday (Sara Paxton, the unhinged but wondrously controlled, controlling David Koechner), with a pocket full of cash and increasingly humiliating, then mutilating “Jackass”-style challenges, first at the tavern, and later at their fine home overlooking the mute, glittering panoply of Los Angeles by night. All that happens is bloody and fucking awful and it’s a wondrous display. What will you do for money? To catch up on your bills? What will you do for even more money? To live like this wicked couple? E.L. Katz’s direction of Trent Haaga and David Chirchirillo’s deep-dark, sump-black comedy script is bittersweet agony, and the actors go for the glorious gusto you’d get in the similar genre of cold theatrical blowouts like Tracy Letts’ “Killer Joe.” Koechner, blooming out from under a tight porkpie hat, has a fine grasp of the cock-of-the-walk and 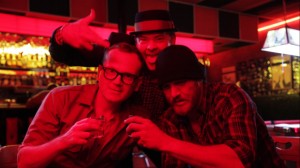 Healy’s hopeful humility in the face of escalating inhumanity both make for great screen acting. (Healy’s performance pairs neatly with his chilly abuse in Craig Zobel’s “Compliance.”) Katz makes one of the most extraordinary, indecent and glorious feature debuts in memory. It’s political cinema, but raucous entertainment first and foremost. As Koechner’s character puts it, after another burst of narcotics, “Yeah, fuck yeah, motherfucker!” The low-light photography on confined, limited locations is also a grimy marvel, taking the contemporary DSLR small-camera esthetic to a taut new fashion.  85m. (Ray Pride)

“Cheap Thrills” is now playing at the Music Box. The red-band trailer is below.