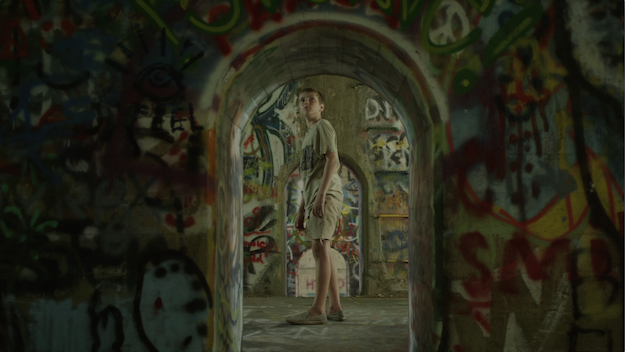 Ugh, kids. Ugh, indie films. Ugh, solemn indie films with kids. There’s an earned reaction that’s so easy to dispense with when a small glory like Daniel Patrick Carbone’s offhand, hazy amazement “Hide Your Smiling Faces” rockets out of nowhere. In daylight amid trickling water and lush greenery (shot in rural New Jersey), a boy’s body is found, and in the summer two come, two brothers steep in fixation on how the child, younger than them, came to die. Tommy (Ryan Jones) is nine, and Eric (Nathan Varnson) is fourteen. Brothers, friends, seekers of mystery amid hush and things that are hidden. The boys have their own secrets in this rustic, foreboding glade. Snakes gobble, dead things appear, a gun recurs. Comparisons can be made, including to early, Malickian David Gordon Green movies like “George Washington.” But if Terrence Malick had never compiled his bucolic furies, would movies that luxuriate in nature like Carbone’s have been made? Of course. Haunted, haunting work like this would find a way into the open air. Carbone has a voice, an eye, and one would guess had a boyhood in a mild wild like the one the brothers eddy through. The elegant, of-course-that’s-the-world cinematography, akin to the loving lushness of work by Jody Lee Lipes (“Martha Marcy May Marlene”) is by Nick Bentgen. Kickstarter was a major source of funding. 80m. (Ray Pride)

“Hide Your Smiling Faces” opens Friday, April 11 at Facets and is available on demand. The trailer is below.