Jonathan Glazer’s third feature, and his first in nearly a decade, “Under The Skin,” reduces Michel Faber’s 300-page-plus 2000 novel to a quintessence: how would an alien see our world if it were to walk among us, if it were to hijack a human form and harvest us by exploiting elemental desire?

The form the unnamed creature assumes is Scarlett Johansson’s, and in the production and post-production of the movie, plot and narrative peeled away in favor of sound and image, and the alien’s encounters on the real-life streets and nearby beaches of Glasgow, Scotland. It’s maximal minimalism, of the kind of heightened sensation you’d expect from the maker of “Sexy Beast” and “Birth.” In a way, his character is the ultimate consumer, shopping for men among the faces on the street, who will be literally taken by desire?

“Oh, yeah?” Glazer says, smiling slightly, on a recent Chicago visit. Then she is, too, as she begins to take pity on her prey. “Yeah, there is something interesting about the fact that for someone to live, someone else has to die.”

Glazer worked with several writers, and a 2008 draft of the script opens with pages of description, including the opening “A vast black surface runs back in infinite blackness.” Glazer says that the way to accomplish the film didn’t come, however, until most of that draft was scrapped in favor of dropping Johansson in a guerilla situation, driving a van with multiple tiny cameras in the cab, and a crew in the back, around the gray northern city, approaching strangers in hope a connection would spark, and then the nonprofessionals could become part of the film. It’s akin to the lore of Michelangelo looking at a piece of marble and saying, I only have to carve away the part that isn’t David.

“Yeah, it’s a big block of marble,” Glazer says, leaning forward, speaking quietly. “The example you have just given is very beautiful, actually. The film, the process of making this film, was quite sculptural. It was about starting with a feeling, an image… Well, not an image but a feeling, a very clear feeling, and then trying to reveal that. Trying to articulate that. And until you feel like you’ve articulated it, you keep going, you know? And then you walk away at the end, when you feel you have got some way to putting that feeling up on a screen. And it looks very different to how you may have imagined it.  And the form is, you know, it has its own thing, and the feeling is what you set out to try and articulate.” And then? “And then you are finished.”

But what drives a director to stay at that process for so long? There’s a world of crap screenplays out there, where screenwriters are told, if you take more than twelve weeks to write your first draft you are wasting your time. You need to move onto the next thing. “Those things, the twelve-week things, I mean, how can there be any truth to that?” Glazer says. “I mean, it might be true to the person that wrote it. But each of us are different, we have our own approach and have our own methods. Neither one is more correct than the other. It is the paring away, but it took a long time to articulate it, to become aware that the methodology and narrative are the same thing. We spent a long time writing it, and the script ended up being fifty-odd pages long and it was mostly description, like a short novel. That’s still writing. That’s writing. You are writing with images.” 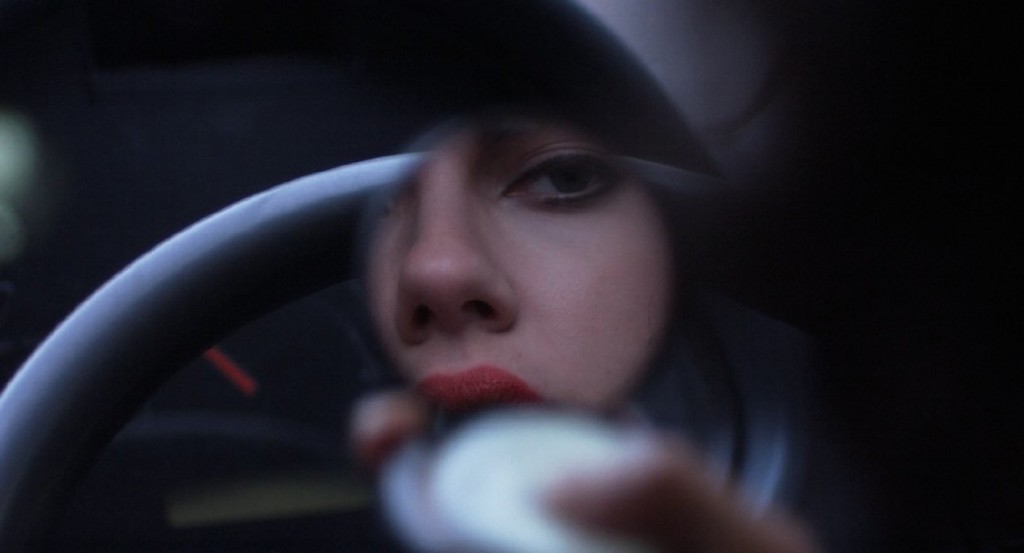 The ideal film, you’re getting to dream someone else’s dream. The visual and aural qualities combine into a plastic object that is also a transporting experience. “I like for a film to be quite transporting,” he says. “I’ve always been drawn to or got the most from films that take me away from my reality. And I travel when I am watching a film that is told that way. And they also explore the medium. And it’s a remarkable medium. It’s often ignored, really, it’s often sort of filmed theater. I think the power of the medium is there to be investigated. That’s what keeps me hooked for such a long period of time, and the spark of the story was enough to go on that journey.”

Mike Leigh shrugs when asked about process, he says, in what he called a “crap koan,” “A piece of string is as long as a piece of string.” “Fair enough you’re right. You are not looking at what you are doing, you are just in it. It becomes your laboratory.”

There is a major, startling, brilliant moment among brilliant moments in “Under the Skin,” a disconnect between appearance and reality, as the creature discovers an essential difference from the humans who desire this female form. “That was the driving interest, really, with this film, the paradox of body and soul accounting for existential unease. This idea of her, being a literal conduit for what it is to be human. It’s just a fascinating character to explore. It’s unending. I never run out of interest for it. We never stopped talking about it, or trying to turn over the ideas until they all felt balanced. It is important to me to pick something I know I will be interested in for ‘as long as it takes.’ You know making a film is quite a big undertaking. And if I am going to do it I have to feel that I am certain in how fertile it is. It will need to grip me as long as it takes.

“She’s like the sea really,” Glazer continues. “She’s just dispassionate. There is no empathy, no individuation, no nothing. That’s the thing she wears. What is that phrase? ‘The suit wears the man, or the man wears the suit’? In the end, she is the man that wears the suit rather then the other way around. It’s just a sense of what she sees in that mirror. And what she sees, she begins to believe is her own identity and is trying to take ownership.”

“Under The Skin” is now playing. A short about its production is below.