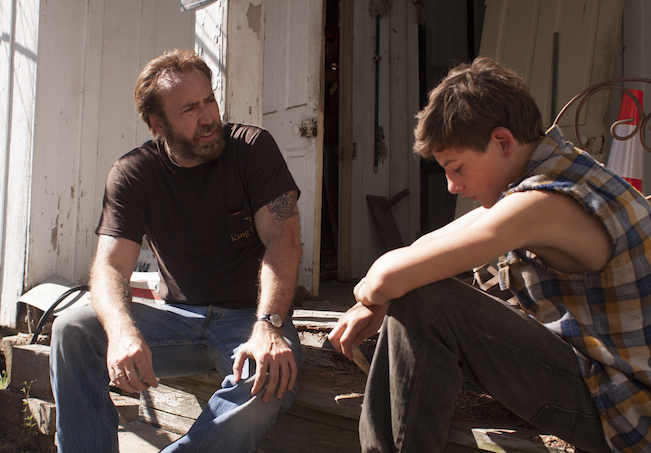 The world of David Gordon Green’s “Joe” is all I ever knew and feared of my upbringing. Not my family, no, but some of my extended extended family, cousins second and third removed, and certainly in the lanes and miles that radiated outward from this small blot on the countryside. I did not come from those people in Kentucky but they lived down the road only a piece. Based on a novel by late Mississippi hardscrabble writer Larry Brown, and adapted by Gary Hawkins, a former professor of Green and director of “The Rough South Of Larry Brown,” Green encapsulates the ragged raw character of a stripe of dispossessed rural whites, their expressed, spoken condition as near an ache as to vernacular poetry. (In its obituary of Brown, the New York Times called the writer a chronicler of “the painful hope of the rural poor.”) Joe, played by Nicolas Cage in full ripe melancholy, is an ex-con who pines nearly every day for the sanctity and sanity of life behind bars. Joe is an ex-con of shaky temperance and even more shaky control of his temper. His life is half-a-hair away from eternal and unkillable chaos. But he struggles, from job to job, from drink to drink, from woman to woman. We meet him killing trees, leading a team that poisons then slashes them. There’s a rich line, “These trees are weak, they’re not strong trees,” which provides a bookend to an ending of pastoral hopefulness. He meets Gary, a bright kid (Tye Sheridan, “Mud”), kept down by a shiftless father who was once a rascal then an asshole on his way to becoming a worthless piece of hateful trash. In Gary, Joe sees a seedling to be preserved, trained as a sapling, to grow tall one day. It’s a ninety-two degree summer in this sun-kissed rural hell, beautiful, racked to ruin and ever more beautiful for that. Only a few things make it seem like it’s not the 1970s, and then you realize, it’s right now, but it’s not right now, it’s the South—Texas or Mississippi or Kentucky or where-have you—and it’s always the past. Fated clutter engulfs interiors: houses, stores, yards with trash pile high, too. It’s like low-light, low-life William Eggleston.  And as a born-and-bred Southerner, I thrilled to the lilt and twang of so much of the dialogue. The fearsome, fearful refrain, “You’re not better than me” is invoked at the worst possible turn of events where you would want to hear that out of a threatened man.

“You gotta stand like you own land,” Joe tells Gary, and a sympathetic officer tells Joe, “You can’t be fist-fighting the law.” Joe’s sympathetic, too, cottons to the dilemmas of others: “Family’s all you got,” he tells the boy who has relations, but no family. Yet he forgives others their flaws, readily—“It ain’t his fault”—and he knows others don’t even have it as together as he does: “Probably ain’t nobody with any sense out tonight.” But later, Joe stews in his powerlessness: “Nothin’. There’s nothin’ I can do and I hate it.” Talking to Green recently, he agreed that his investment in the character of Kenny Powers makes it possible for him to linger over the distillate soul of Joe, a man who says, “I can’t get my hands dirty in ever little thing,” but who can reduce the particulars of his life this given week to the elegant summation, “I slapped some asshole at the bar the other night and he came and shot me.” What ought to be bleak is instead a report on the tender dramatic attentions of one of our most generous contemporary filmmakers. 117m. (Ray Pride)

“Joe” is now playing in limited release, including 600 North Michigan and South Barrington, as well as on demand. The trailer is below.